A Japanese roleplaying game published in 1990, based on the anime TV show Akuma-Kun.

Akuma-kun: Makai no Wana ("Akuma-kun: Trap of the Devil") is a roleplaying game developed for the Nintendo Entertainment System by Tose and published by Bandai on February 24th, 1990 in Japan. Based on a popular 1989 anime TV series (which in itself was based on a manga series) Akuma-Kun, the game puts players in control of Akuma-kun as he travels the world visiting towns and dungeons on his way to make connection with the demon world.

Although very similar to most roleplaying games of the time in terms of gameplay, this switch in narrative from the usual tropes of having to kill demons to having to befriend them, helped to set the game apart from others. Furthermore, battles would play into this idea by allowing players to spawn demons to fight alongside them, similar to the Megami Tensei series. 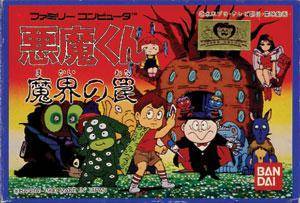