When the U.S. President has been kidnapped by ninjas, this game dares to ask the question: Are you a bad enough dude to rescue the president?

Bad Dudes vs. DragonNinja (known in Japan as DragonNinja) and in the NES port as Bad Dudes) is a side-scrolling beat-'em-up platformer developed and released by Data East for arcades in 1988.

A side-scrolling beat-'em-up platformer reminiscent of Sega's Shinobi, Bad Dudes vs. DragonNinja puts players control of street brawlers Blade and Striker (the titular "Bad Dudes") as they fight an army of ninjas to rescue President Ronnie from the titular DragonNinja.

The game received ports to numerous consoles and computers in the late '80s, the most notable of which is the Nintendo Entertainment System port (as it was a first-party Data East conversion).

The arcade version of the game later received two ports after Data East's bankruptcy: one for the 2010 Wii compilation Data East Arcade Classics, and a standalone digital release for the Nintendo Switch. The Switch version was released by Flying Tiger Entertainment on April 5, 2018, as part of the Johnny Turbo's Arcade series, and was later included in the compilation Retro Classix Collection #1: Data East on October 1, 2020 (as well as the 2-in-1 Pack with Two Crude).

Many ports of the game were released with Ocean developing versions for Amiga, Amstrad CPC, Atari ST, Commodore 64, MSX, and ZX Spectrum.

Quicksilver Software, Inc. did the porting for the Apple II and DOS version of the game.

The Zeebo game was ported by Onan Games. 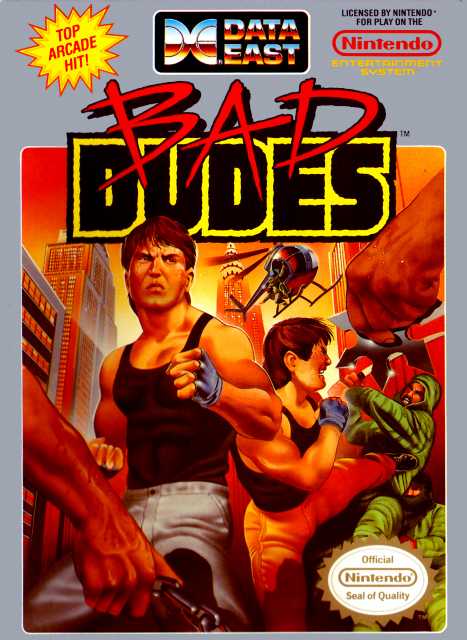