Grand Theft Auto: Vice City Stories (often referred to as simply Vice City Stories) is an open-world action game for the PSP, developed by Rockstar North and Rockstar Leeds and published by Rockstar Games in 2006. It is the fifth and final instalment in the Grand Theft Auto III canon, and the second game within that canon to appear on the PSP handheld system. It was ported to the PlayStation 2 the following year. The game follows the exploits of Victor Vance, and acts as a prequel to 2002's Grand Theft Auto: Vice City.

Despite being the last game to be released in the GTAIII canon, the events of Grand Theft Auto: Vice City Stories are chronologically the first to occur within that canon. The game takes place in the exotic locale of Vice City, Florida, a fictional city loosely inspired by the real-world city of Miami. The events of Vice City Stories are set in the year 1984. As previously mentioned, the game is a prequel to Grand Theft Auto: Vice City, which takes place two years later in 1986. As a result of this fact, a number of familiar locations from Vice City cannot be found on the map in Vice City Stories, replaced by formative infrastructures or trailer parks.

As with all other Grand Theft Auto games, Vice City Stories tells a mission-based story in which various tasks must be completed in order to progress through the game. Missions typically involve following the orders of notorious criminals, often entailing law-breaking activities such as drug trafficking, theft and murder. Upon completion of these missions, a cash reward is usually awarded to the player and more missions may become available. There are two main types of missions in Vice City Stories; story missions, which are tied to the game's narrative; and side missions, which are not linked to progression in the game, but may offer rewards in the form of money, weapons, or unlockable content.

As the game's name implies, criminal activity plays a major role within the gameplay of Vice City Stories. Any number of crimes may be committed by the player over the course of the game, either as part of the game's storyline, part of a side mission, or just for fun.

Grand Theft Auto features a wide variety of weapons available to the player. As with previous games in the franchise, weapons are divided into different categories, such as melee weapons, pistols, shotguns, rifles, and so on. The player may have one of each weapon type in their possession at any one time. A detailed description of the available weaponry can be found below.

When all else fails, Victor can always fall back on Mother Nature's own arsenal. Fist weapons are more rudimentary than melee weapons, and cause less damage.

When fists won't quite cut it and you want to leave more of a mark. The game boasts a wide variety of melee weapons, ranging from blunt to bladed, and all of them are very handy in a brawl.

Explosive weapons offer the most bang for your buck and are useful when dealing with crowds of people or vehicles.

Your standard firearm, pistols are likely to be the first gun you'll encounter in the game. They are useful in one-on-one combat situations.

Shotguns are useful when dealing with numbers of enemies at close range. They are powerful weapons, although their effectiveness is severely limited over long ranges.

Useful when dealing with large numbers of enemies at a distance, sub-machine guns are fairly commonplace on the streets of Vice City.

The most useful all-round weapons, assault rifles offer the utility of a sub-machine gun combined with more stopping power.

Although not very practical in general combat, heavy weapons often provide the most fun way of dispatching one's targets and tend to be the weapons of choice for causers of chaos.

Incredibly useful over very long distances, sniper rifles may be used for assassination missions or simply as a means of picking off undesirables from afar.

Grand Theft Auto: Vice City Stories follows in the footsteps of its predecessors, offering an impressive array of licensed music in keeping with the early '80s setting. The game features nine radio stations, including eight themed music stations and a public radio station. Details of the radio stations can be found below. 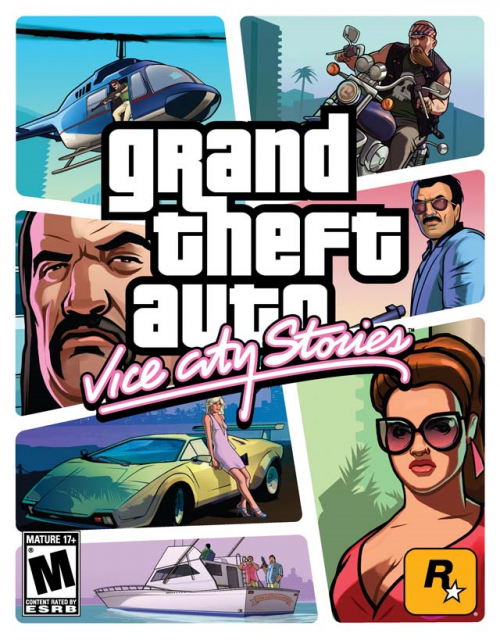