Bully (known as Canis Canem Edit in Europe) is an open-world game starring Jimmy Hopkins, a troubled teenager with a strong distaste for authority figures and bullies alike. After being ejected from a number of schools, Jimmy ends up at Bullworth Academy, a private school modeled largely after the ostensibly prestigious private schools. The main storyline in Bully concerns Jimmy's dealings with the various cliques and faculty within the school, as well as a sociopathic student named Gary Smith.

The gameplay in Bully draws from many of Rockstar's previous games, particularly Grant Theft Auto. Additionally, the new targeting system and combat system of Bully is similar to that of the Manhunt games. A unique part of the gameplay is the mini-games that occur when Jimmy attends class. Completing the mini-games, such as dodgeball in Gym or word creation in English, gives Jimmy abilities that help him in regular gameplay. In addition to the seemingly loose gameplay, there are some limits placed that are similar to those that a real 15-year-old boy would face. For example, unlike the adult protagonists of the Grand Theft Auto series, if Jimmy stays up too late, he will pass out from exhaustion, encouraging the player to go to bed before that happens.

While comparisons to Rockstar's successful Grand Theft Auto franchise are apt from a mechanical and a thematic perspective, Bully is smaller in scope than your typical GTA, with a lighter tone and more low key violence - anyone defeated by Jimmy is merely knocked out of commission, not killed, and will be fine the next time he sees them. But, due to the publisher's history, as well as the relatively sensitive nature of school violence, Bully received a great deal of media attention leading up to its release, with media watchdogs expressing concern over its potential glamorization of bullying. It was for this reason that in Europe the game was published under the alternate title Canis Canem Edit, Latin for "dog eat dog", the motto of Bullworth Academy. Generally speaking, though, Bully is a game that condemns bullying, as most of the story is spent overthrowing the established pecking order at Bullworth Academy.

Bully was originally released on the PlayStation 2, though a special enhanced edition eventually came to both the Xbox 360, Nintendo Wii, and PC under the title Bully: Scholarship Edition.

Jimmy Hopkins, a badly behaved 15 year old, is sent to Bullworth Academy, one of the worst private schools in America, after his mother and stepfather begin their year-long honeymoon. He immediately notices that the school is in a huge mess and needs to be sorted out, everyone is sorted into cliques and pranks are being pulled all over the place. Throughout the game Jimmy befriends the different sets of cliques and helps them with a variety of tasks.

The story is divided into 6 chapters:

There are 5 lessons for each of the 6 classes, if the player fails a class they can come back and try the class again. There is a set timetable and the player can only attend classes in the correct time period, skipping a class will alert prefects, teachers and police.

The player will be provided with a set of letters and must make as many words as possible from the letters.

The player must guide a pencil around a rectangular canvas and section off bits of the drawing avoiding enemies that will force the player to lose a life when touched. Art lessons are a lot like the arcade game, Qix.

Similar to Music lessons however much easier because you have more time to press the buttons, simply press the correct button as it passes across the line.

The player is given a camera and needs to take photos of set places/objects. For example one of the Photography classes requires the player to take pictures of all the flags on the Bullworth premises.

There are two different types of Gym lessons. The first one is wrestling, the player has to hit certain buttons to perform fighting combos and they must then use them on the opponent. When a lesson is finished the player can then use those moves at any time. The second type of Gym lesson is dodgeball, Jimmy is placed on the same team as the nerds and needs to beat the opposing team at dodgeball.

The player needs to perform the moves on the controller that appear on the screen. Timing and accuracy are essential in this one; this is possibly the hardest class and many players had troubles with this class.

Bullworth Academy is home to six different cliques, listed below.

Bullies get joy out of beating younger kids to a pulp and taunting the Townies. This all-male clique can be recognized by their denim jeans and white untucked shirts. Their leader is Russell Northrop.

Nerds are the most intelligent kids in school, they mainly hang out in the library and have a talent in making stink bombs, itching powder and other various weapons. They are often bullied by the other cliques, especially the Jocks who love to stuff the Nerds into lockers and trash cans. Their leader is Earnest Jones.

Preppies are the rich, snobby kids of the school. They wear more expensive, nicer uniforms and are usually found in Harrington House or in the local boxing gym. They believe that they are above everyone else in the world and have a love for boxing. Their leader is Derby Harrington. By going to the boxing gym the player can take on 4 seperate matches against the preps, each victory results in a permanent increase to punching damage.

Jocks are the toughest kids in school and love to bully other people, especially the Nerds. They are very athletic people and can often be found at the back of the school in the gym or on the football field. Their leader is Ted Thompson.

Greasers are the poor kids in school who usually live in trailers or worn down houses. They are tough and all of them wear leather jackets and hang around the auto shop. They love to engineer cars and race bikes. Their leader is Johnny Vincent.

Townies don't actually attend Bullworth but they hate the students that do. They live in the far side of town and if you visit them, they will be far from happy about it. Their leader is Edgar Munsen.

Scattered around the game world in Bully are rubber bands. After completing the class ‘Geography 2’ these show up on the map in the game menu. For collecting all 75 of these the player is rewarded with a rubber band ball, which can be used in combat.

After completing the class ‘Geography 3’, these show up on the map in the game menu. After collecting all 40 of these, the player is rewarded with a ‘Grottos and Gremlins’ based costume.

Located around the game world are lawn gnomes, which can be smashed. After completing ‘Geography 5’, they will show up on the map in the game menu. For smashing all 25 of these, the player is rewarded with a gnome outfit.

They can be given to the old homeless man behind the unused school bus in Bullworth Academy in exchange for fighting lessons. In these lessons you learn new, more powerful moves. There are a total of 6 transistors to collect.

Chapter 4: A Healthy Mind in a Healthy Body, and Other Lies

Chapter 5: The Fall and Rise of Jimmy Hopkins, Aged 15

Bully was banned in Brazil and appeals were made to ban it in the UK and USA. All PAL copies of Bully were renamed to Canis Canem Edit, Latin for 'Dog Eat Dog'. Rockstar didn't ever release an official statement as to why the name was changed however it is suspected that it was due to the high amount of criticism the game received.

There was a minor homophobic outburst as a result of Jimmy's ability to kiss certain boys, in addition to all the girls his age in the game, with certain opponents claiming the game encouraged a homosexual lifestyle. Jack Thompson was specifically opposed to the game, calling it a "Columbine simulator" and accusing the game of being racist after seeing a screenshot of Jimmy sticking a black student's head in a toilet.

Bullworth Academy, a private school where all the creeps and trouble makers go who didn't cut it in public school, or have been dealt a very bad hand from their parents. If you aren't in a group at this school, even the nerd will think you're a loser. The school is broken up into four different groups. Greasers, their hang out is the garage in the school where they work on their bikes. Jocks, the tough athletes who hang out near the football field and are obsessed with their muscles and sports. Preps, the rich, stuck up snobs who see themselves as superior to everyone else. They have the best money can buy and they hang out in the boxing arena in Bullworth Vale. Finally, the Nerds, while they have the knowledge to build most of the projectile weapons in Bully for you, they are constantly picked on by the other groups. Their hangout is the library and observatory. 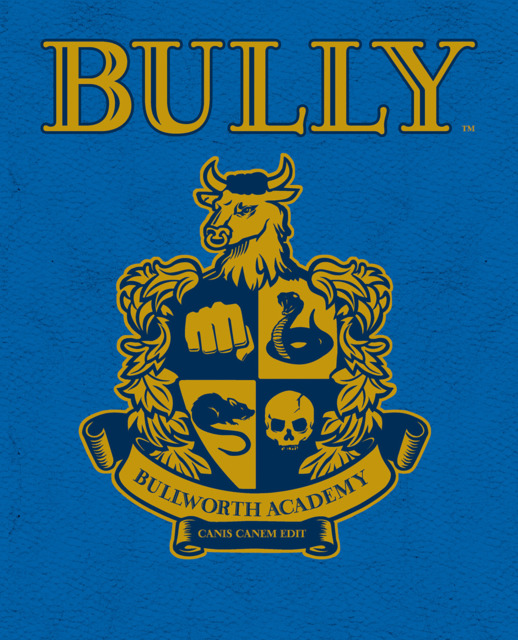