An action-RPG by tri-Ace that tells the story of Jack Russell, an impudent young man who wants to become a knight and serve the kingdom of Radiata. It is notable for its broad selection of side-quests, and a large cast of characters who follow unique schedules.
PlayStation 2

Radiata Stories is an action-based RPG developed by tri-Ace. Unlike all other tri-Ace games, the soundtrack wasn't composed by Motoi Sakuraba this time around, but by Noriyuki Iwadare. He did, however, arrange some of Sakuraba's battle themes for the optional boss battles that have become a trademark amongst tri-Ace's games.

Along the way, Jack can meet and adventure with 176 different characters, but in order to do so, you have to pay close attention to all of the little details in the world. Time plays a very important role in Radiata Stories. Certain characters are only recruitable at certain times of the day, while they're doing certain activities, and it's also dependent on who you have in your party. Each character has a little backstory within the game's menu, which provides a nice read when you're getting a little tired with adventuring. Unfortunately, due to a choice the player has to make halfway through the game that will have a major influence on how the rest of the game plays out, the player needs to play the game at least twice in order to complete their friends list.

Radiata Stories has an action-based battle system similar to that of other tri-Ace games such as Star Ocean: Till the end of Time. The player only has one attack button to their disposal, with which they can execute various attacks dependent on the weapon they currently have equipped. They can only execute as many attacks in a combo as they have assigned to their weapon. For example, if the player sets up four attacks and presses the attack button four times, all attacks will be executed in the order they were assigned, and there will be a brief period of downtime after which they can restart their combo from scratch. Of course, the player is also able to quit their combo midway if they feel the remaining attacks aren't appriopriate for the current situation. The player also has the ability to guard, and if they attack the enemy right after they've been hit while guarding, it counts as a counter and will do extra damage.

While the player can only directly control Jack in battle, they are also able to give commands to up to three other party members. These commands can be bought as Command Scrolls from certain shops and then taught to Jack. Commands may range from simple moves party members already know such as defending, to completely new team skills such as creating an earthquake. Most commands will cost some of the player's Volty Bar, which can increase or decrease depending on if party members are doing damage or getting hit themselves respectively. If the Volty Bar is maxed out, characters are able to execute a super attack called a Volty Blast.

There are 4 weapon types that the main character Jack Russell can use. Jack is the only character that can change the weapon and armor that he uses, all other NPCs are stuck with their weapon and armor. Also each weapon type has a different "Volty attack." The volty attacks are a super attack that can be used with either 10 volty points or "MAX" volty points (100). Some recruitable characters also have a votly blast (the name for the 100 volty point attack), so that is one factor a player could consider when recruiting allies.

The four weapon types are:

One-handed sword: The volty attack for this weapon is a single hit that breaks any guard. The volty blast is called "Limit Break," with Limit Break jack slashes his target enemy several times before knocking them up into the air with one final slash. ( volty blast:high damage, volty attack: low damage)

Two-handed sword: The volty attack for two-handed swords is a shock-wave which damages enemies as long as they stay in the line. The volty blast is called "Army of Shadows." Jack makes three shadow copies of himself and they all slash his target at the same time. (volty blast: very high damage, volty attack: medium damage)

Spear: Spears have the strongest volty attack as long as you get all of its hits on your target. Jack stabs his target 8-10 times and ends with a guard braking stab that knocks his target down. The volty blast for spears is called "Thousand Spears." Jack stabs his target 4 times and then jumps in the air stabbing his spear into the ground, after which many different spears shoot out of the ground and knock the target into the air. (volty blast: medium damage, volty attack: very high damage)

Axe: In some players opinions the worst weapon choice, or at the lest the least used weapon choice. The volty attack has jack jump in the air and cause a surrounding shock-wave knock all enemies back that are within melee range of him. The volty blast is called "Radial Smash." Jack throws his axe spinning into the air, then jumps up and catches it and starts spinning with it and brings the axe down on his targets head. (volty blast: low damage volty attack: high damage (if you get more than one enemy hit))

Each volty blast has an interesting animation where you and your target are removed from battle to take part in the animation. The volty blast is free damage with a cool cut-scene attached. So if you don't care what it look like and you just want high damage, go with a two-handed sword or a spear. If you want looks to go with it then choose whichever weapon your heart desires.

Also one key note is that each weapon has a different set of moves. You start off with only two moves and as you use a weapon more you learn more moves. Once you learn all the moves for a weapon you unlock its volty blast. An easy way to do this is to fight training dummies (by kicking them) and completing the challenges. Each challenge completed earns a new move. Weapons also have something called "CP." CP means combo points and each move has a CP requirement, so you can just put any moves together that you like, they have to fit within the weapons CP limit. Higher level weapons tend to have higher CP limits. Some moves flow together better than other moves, so in the move list it shows which direction your weapon will be moving when using that move, so if you have a left swinging attack follow it up with a right swinging attack since your weapon is now already to swing to the right. To truly see which moves work best you will have to experiment a little and see what you most prefer.

While moving around in the world of Radiata Stories, the player can hit the "x" button at anytime to kick whatever id in front of him. If you kick an NPC they sure arent going to enjoy that and you may have to fight them, be careful when doing this, some NPC's will always remain out of your league until the very end of the game. Kicking rocks or barrels and the like will get you items on the other hand. However not all objects will give you an item when kicked. 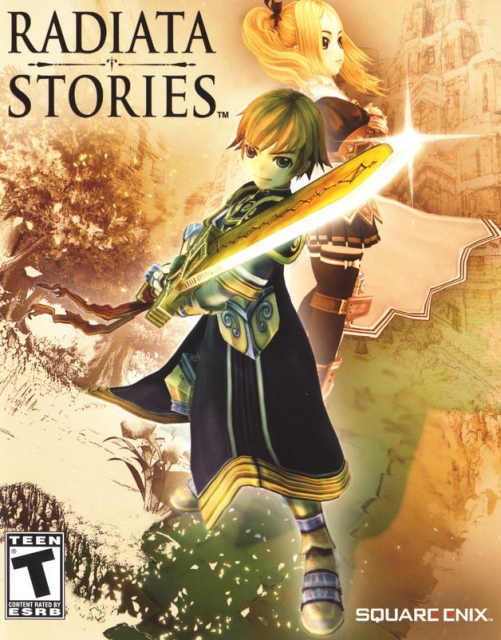