Data East's first post-SF2 fighting game, infamous for being so similar to Street Fighter II that it triggered a lawsuit from Capcom USA.

Fighter's History is a 2D fighting game developed and released by Data East for arcades in 1993.

The game featured basic, smooth gameplay mechanics and the standard six-button control scheme made famous by Street Fighter II. (Things that other fighting games at the time did not implement well.) The game topped the Japanese arcade charts at the time, causing Capcom to take notice and bring Data East to court in the United States.

One of the main features of this game is that in order to dizzy an opponent, the player must attack the opponent's weak position (which differs per character and can be head, chest, or legs). Clothing representing the weak position glow as it's attacked until it breaks, dizzying the opponent. It's also known for including one of Data East's earlier characters, the Russian strongman Karnov, as the game's final boss.

The game was later ported to the Super Nintendo Entertainment System worldwide a year later, adding features such as a Turbo speed setting and the ability to play as the two boss characters. The game also spawned two sequels: Fighter's History Dynamite for the Neo Geo in 1994 and the Japanese-exclusive Fighter's History: Mizoguchi Kiki Ippatsu!! for the SNES in 1995.

The game later received a digitally re-release by Flying Tiger Entertainment for the Nintendo Switch on January 3, 2019, as part of the Johnny Turbo's Arcade series.

The game includes nine playable characters and two unplayable bosses (who were later made playable in the SNES version).

Coincidentally, Data East USA has been in court involving a fighting game in the 1980s, claiming that Epyx licensed and distributed World Karate Championship (better known as International Karate), which they believe infringed on their fighting game (Karate Champ). The game names were similar, combatants wore white and red outfits, referees looked the same in-game, the moves were similar, and the scoring mechanisms were the same. However, the court judged that these similarities encompassed "the idea of karate" (they were the elements of a karate video game) and was not protected by copyright. Due to this, Data East lost the case.

Capcom USA attempted to sue Data East USA in 1994 with similar claims, claiming that Fighter's History infringed on Street Fighter II. Capcom identified the similarities into four categories: representation of the playable characters, representation of the special moves, control sequences for the special moves, and miscellaneous (such as "V.S." screens, attract mode, and tracking a player's vitality). The court ruled that the miscellaneous similarities were commonplace and not protected by copyright (in a similar vein to the previous Data East lawsuit). The court also ruled that while the control sequences for the special moves were similar, they were not a form of expression protected by copyright. As for the representation of the playable characters and special moves, the court found three characters (Matlok, Feilin, and Ray) and five special moves in Fighter's History were similar but not virtually identical to characters and moves found in Street Fighter II. Because of this analysis, Capcom lost the case.

This case marks a decline of Capcom's close grip of the fighting game genre, as it provoked other fighting games to be less restrictive in terms of emulating the mechanics of what is known as the "traditional fighting game". 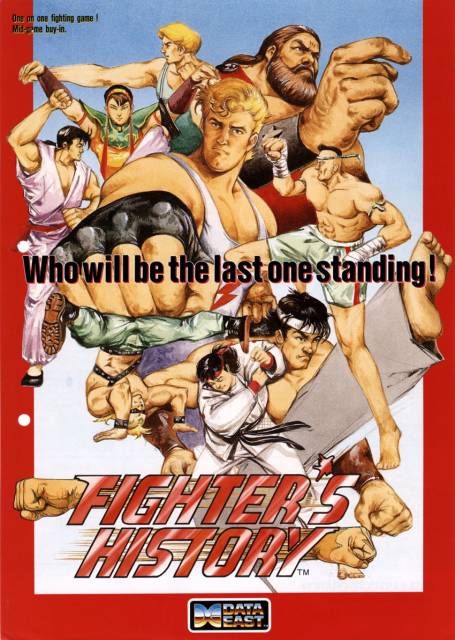