Collect stars by placing them between two matching friends in this Tetris-like block puzzler.

Kirby's Star Stacker is a puzzle game where the object is to collect as many stars as possible. To do this, the player must sandwich the stars either vertically or horizontally between two identical friends. These friends are Rick, Kine, and Coo, Kirby's buddies from the "Dream Land" series.

Kirby's Star Stacker was originally released for the Nintendo Game Boy in all regions in 1997. In 1998 a Japan-exclusive Super Famicom version became available on the Nintendo Power cart-writing service. The popularity of the game lead to a full retail version the following year, which was also one of the last games ever released for the system.

Both versions are called Kirby no Kirakira Kizzu in Japan, which translates to Kirby's Sparkling Kids. The Super Famicom version of the game is commonly referred to as Kirby's Super Star Stacker outside of Japan. If considering this version as a separate game, it is the only game in the Kirby series not to have been released elsewhere. Despite a large interest among international fans of the series, it has not yet received a fan translation either, as all relevant text was coded using sprites instead of text that can be edited or rewritten through normal means.

Objects fall from the sky in pairs of two. If the pile of friends and stars reaches the top of the gameplay area, the game is over. King DeDeDe's head sits on the right hand side of the screen. DeDeDe is there to make sure that Kirby makes as little progress as possible, and if he doesn't like what he sees, his head will turn into a fist. When this fist pounds down and shakes the screen, the level of blocks on the playing area will increase. Like in Tetris, if the blocks on the playing field reach to the top of the screen and no more can fit onto it without being pushed off the top, then the game will be over.

Creating a chain reaction will cause stars to fall from the sky. In other words, if deleting one pair of blocks causes another pair of blocks to be deleted, then more star blocks will fall from the top of the playing field and potentially create even more chain reactions, which will in turn cause even greater numbers of stars to drop onto the playing field. These star blocks always count towards the total score, and will always instantly disappear if they don't cause a reaction, preventing them from messing up the field.

Round Clear - Clear a certain number of stars to proceed to the next round.

Challenge - The game's endless mode, clear as many stars as possible before the game is over.

Time Attack - Clear as many stars as possible in exactly three minutes. 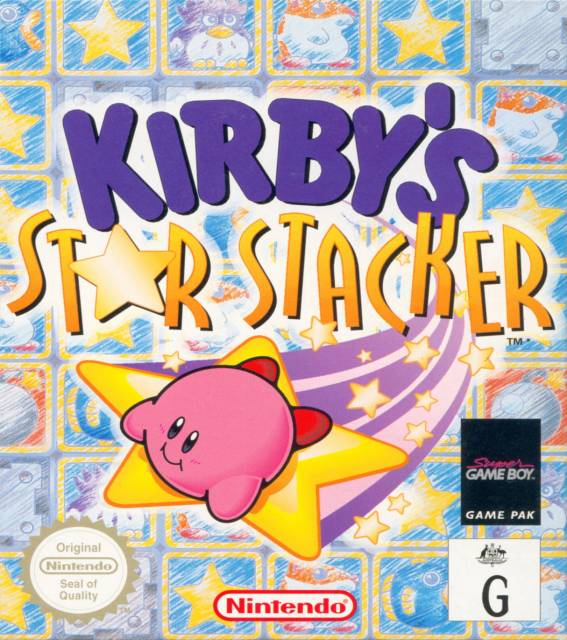