Mr. Do! is an Arcade style game similar to Dig Dug and Pac-Man, in which a clown is charged with the mission to either collect all cherries or kill all enemies.

In Mr. Do, the player controls the aptly named title character - A Clown digging his way through a series Maze levels (similar to Boulderdash or Dig Dug), collecting cherries, whole avoiding or destroying the monsters roaming the tunnels. Mr. Do is capable of digging both horizontal and vertical tunnels. Apart from cherries, the levels also features apples. Apples cannot be collected but will rather fall down once Mr. Do digs sufficient room underneath. Ideally, the apples will squash monsters that mingle right beneath the apple. On the other hand, Mr. Do can also be eliminated when an apple happens to falls on him instead. Pushing the apples around horizontally can also help moving the same into position. Furthermore, Mr. Do can shoot a special "powerball" to eliminate enemies. However, the charge is limited to one shot and Mr. Do will have to wait until the ball bounces back to him until he can use the power again.

The levels are cleared when all cherries are collected, all enemies killed, the five letters spelling E-X-T-R-A (Extra Life) or a diamond is found.

There are many types of food that give Mr. Do a varied amount of points and send out Pac-Man style ghost enemies that try to kill him! Here is a list of food:

The Atari 2600 version was poorly rated for bad graphics and poor gameplay. 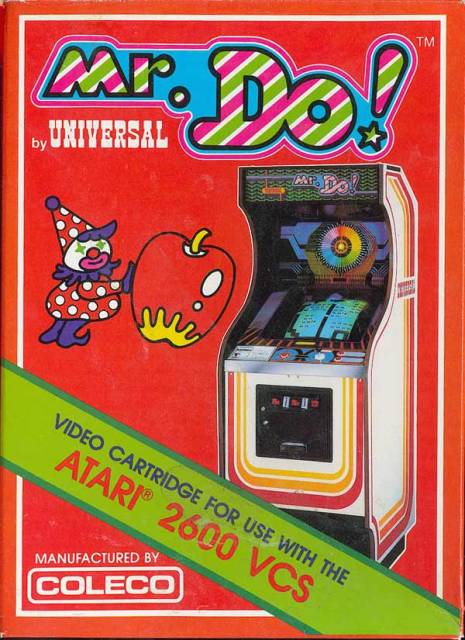