Dr. Mario 64 is puzzle game. Developed by Newcom and published by Nintendo, it was released April 9th 2001 in North America and November 2003 in China. The game was released on both the Nintendo 64 and iQue.

Like any drop down puzzle game, Dr. Mario requires the player to line up certain colors so that the blocks can removed to create more space. To remove blocks, no more than a minimum of four of the same color must be connected to make them disappear. These include the Red Virus (Fever), the Blue Virus (Chill), and the Yellow Virus (Weird); with a Megavitamin color designed to kill them. Dr. Mario 64 includes different gameplay modes these are as follows, Classic mode, which features a similar set-up and design to earlier Dr. Mario video games. Story mode, in which the player may take control of either Dr. Mario or Wario to track down the stolen Megavitamins, battling computer players along the way. Another mode pits the player against the computer as any character the player has played as or fought against. Up to four players may play at once in the multiplayer mode, which is designed similarly to the CPU Vs. mode. 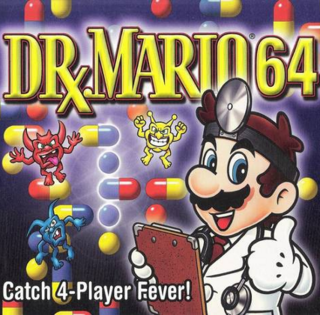