Freedom Fighters is a squad-based shooter published by EA and developed by IO Interactive, the creators of the Hitman series. Taking a break from making M-rated assassination based shooters with Eidos, developer IO Interactive set the game in an alternate history, where Russia became the dominant superpower and has slowly conquered every remaining continent, culminating in a successful invasion of the United States of America. Players take control of everyman-turned-hero Christopher Stone and his team of rag-tag rebels as they work together to force the Russians out of New York.

While other PC games (notably the Ghost Recon series) have let players issue commands to a team of AI-controlled soldiers, Freedom Fighters successfully implemented and popularized the concept of " Squad Tactics," by making it an easier process than in other games of its kind, let alone on a console.

IO would go on to create a spiritual successor to Freedom Fighters, called Kane and Lynch: Dead Men.

Freedom Fighters, at its core, is a standard third-person shooter. Players can take a pistol, assault rifle,sniper rifle, magnum, or sub-machine gun into combat, as well as two kinds of grenades (standardfragmentation grenades and Molotov cocktails). Chris also has a wrench for melee combat.

In combat, Stone can fire his weapons from the hip, or he can increase his accuracy (and zoom in on targets) by holding the gun at eye-level. This switches the combat perspective to a behind-the-shoulder view that later appears in Resident Evil 4, Gears of War, and Dark Sector.

The most important item in Stone's possession is the health pack. Depending on the difficulty level, Stone can take a number of health packs into battle. Beyond using them to heal his own wounds, Stone can use health packs on wounded squad-mates and civilians spread throughout the various levels. The latter will net Chris more Charisma (also filled by completing objectives in missions).

As the charisma meter fills throughout the game, Stone will be able to enlist the support of more members of the Resistance. Upon maxing out the charisma meter, Stone can lead twelve fighters (or two squads of six fighters) into battle against the Russians.

The tactical combat is where Freedom Fighters differentiates itself from other third-person shooters. Stone can issue one of three commands to his squads. The Defend command will cause allies to hold a position at all costs. The Attack command will cause allies to advance forward, take cover, and open fire at the enemy in the general vicinity. Additionally, using the Attack command while zoomed in will cause the player's forces to direct fire at individual soldiers, a useful technique against more heavily defended Russians. Finally, the Recall button causes allies to fall in behind Stone, leaving their cover in the process.

To increase the amount of tactical control over a battle, players can periodically choose to either tap or hold down the Attack, Defend, and Recall buttons. While holding down a button will cause all units to perform the action, simply tapping the button will issue the order to a single member of the squad.

Between and during missions, Stone will come across various manholes. Being a plumber, Stone can open these manholes to gain access to the sewer system, which is the location of the underground hideout of the Freedom Fighters. From here, Stone can select a mission weapon load out and choose in which order he would like to tackle each set of levels (the player can usually choose between two to three levels at any given time).

Not all parts of a level can be instantly accessed, however. The player will sometimes complete an objective in one level before using a manhole to travel to a completely different level. For instance, at the beginning of the game, Stone is tasked with taking out a Russian base that's been set up inside a police station. However, it's impossible to advance on the police station, as snipers have barricaded themselves inside the building and will shoot anyone coming towards the station. To get through the level, players have to guide Stone to the other level -- the post office -- and blow up a gas station. Thus eliminating the snipers, and allowing him passage to the police station.

Completing levels in a certain order has beneficial effects. For example, taking out a grounded helicopter in one part of the game will prevent the bird from attacking Stone in another level. Strategic choice of level completion, much like the Mega Man series, is key to completing Freedom Fighters.

The success of the Squad Tactics mechanic in Freedom Fighters is due in large part to the game's surprisingly competent AI. Unlike many early attempts at Squad Tactics, the AI-controlled companions in Freedom Fighters utilize a strong Artificial Intelligence system that prevents many of the hang ups plagued in other games featuring Squad Tactics. Stone's Resistance Fighters run to their locations quickly and are very adept at finding/using cover. The troops respond to the player's orders immediately, and are rarely doing things that are associated with Bad AI (standing out in the open, firing at unimportant targets, not being able to find the "path" to a certain part of the level, etc.).

The Russian aggressors also featured some solid AI routines, though generally not as impressive as the allied companions. While Russians can also find and use cover, they will primarily use their superior numbers to force the player back.

The world takes place in an alternate history where the Russians drop a nuclear bomb on Germany to end World War II, leading to the Soviet Union becoming the predominant power in the world. After successfully bringing missiles to Cuba and failing to assassinate the U.S. President, the Soviets prepare for a full scale invasion.

The game opens with players taking control of Christopher Stone, a plumber in New York. He has a conversation with his brother, Troy, about the woman of the "Warning Against Reds" group, Isabella. They are called to fix a standard plumbing issue in an apartment building, but as they arrive, many soldiers and helicopters surround the apartment, and Troy is taken by General Tatarin, mistaken to be Isabella's boyfriend. Unable to save Troy, Christopher and Isabella's neighbor Mr. Jones are forced to fight their way out to safety.

After exiting the building and going back onto street level, they see an invaded New York City in chaos. Hundreds of tanks, planes, and thousands of soldiers engulf the metropolis, as American citizens are in mass panic. Chris is lead through the chaos by Mr. Jones to meet a man named Phil who is already in the middle of fighting the Soviets and leads Chris into the sewers to escape the war zone that has become New York City. From the sewers, Chris, with the help of Mr. Jones and Phil, plan to rescue Troy and Isabella. First, Chris goes to the New York City police department to rescue Isabella who was arrested on the street by the Russian soldiers. Chris is given advice on how to rescue Isabella by an orphan known as "the Kid" and several injured officers. By following their plan, Chris is able to rescue Isabella. As a reward, Isabella leads Chris into the underground world of the Freedom Fighters. From these headquarters, Chris is able to mount a rescue for his brother and prove his worth to the cause.

With the help of Isabella, Mr. Jones, Troy and Phil, Chris leads various rebels to repel the Russians. Chris moves through the field of battle issuing commands to his troops to attack, defend or follow and receiving hints from the Kid. After every territory is retaken Chris raises the American flag. After accomplishing many missions to disable the Russian presence, Chris becomes known by the Russians as the Freedom Phantom.

After the murder of his brother, Chris is able to infiltrate the main Russian base on Governor Island and assassinate General Tatarin, only to be betrayed by Mr. Jones, who turns out to be Colonel Bulba, the leader of the KGB who has taken Isabella hostage. Again, with the help of Phil and the Kid, Chris escapes into the sewers and plans to rescue Isabella and the world from the control of Bulba.

Chris leads Phil and the Kid into the Commie news station in the middle of Times Square to speak to the city and lead New York into fighting back against the Russians. Chris and Phil then, with added help from the citizens of New York, plan a massive assault on Governor's Island, attacking the Russian main base. While the initial attack is a loss, Chris is able to lead the rebel army into the middle of Governor's Island, kill Bulba and rescue Isabella, rescuing New York City from the Soviets, though the vast majority of the world remains under Soviet control.

Finishing the game on the "You Got What it Takes?" or "Against All Odds" difficulties unlocks the "Liberty Island" mission. The mission was scrapped from the original game, and features Christopher Stone fighting along with other freedom fighters on Liberty Island. When players reach the end of the level they enter into the Statue of Liberty's torch where they're greeted with the words "The END," and the mission ends.

The soundtrack for Freedom Fighters was released on November 11, 2003. It was composed by Jesper Kyd, and performed by the Hungarian Radio Choir. 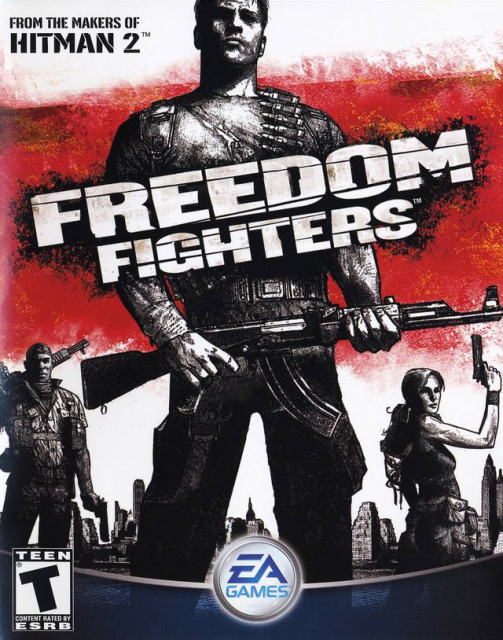