A Nintendo 64 port of Robotron X, an update of the arcade classic Robotron 2084 that was released on PS1 and PC a month earlier.

Robotron 64 is a single player Action game, developed by Player 1 and Published by Crave Entertainment, released Jan 6th 1998. Robotron 64 is a port of the original Robotron X which was earlier released for the PC and PS1. 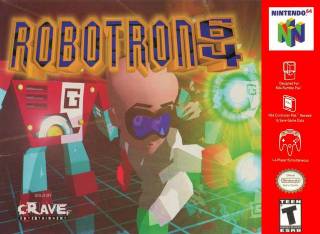