Soulstorm, developed by Iron Lore, is the third and final expansion pack to Relic's hit real-time strategy game, Warhammer 40,000: Dawn of War. The Sisters of Battle and the Dark Eldar join the fray as you fight to dominate the Kaurava system.

Warhammer 40.000: Dawn of War - Soulstorm makes a variety of additions to the original game in the form of a turn-based campaign spanning a whole planetary system, two completely new unique factions, and a new flying unit for each race. It also introduces a number of multiplayer maps, bug-fixes and balance changes, even further enhancing the Dawn of War experience.

The campaign in Dawn of War: Soulstorm utilizes a Risk-style meta-map depicting the Kaurava system to determine the flow of battle. All 9 factions begin with a chunk of territory and a single army, and wage war by moving their armies in a turn-based fashion. Each army is capable of conquering the territories of other factions, and players may choose to do this by having the computer auto-resolve the battle, or by fighting for the territory in a skirmish-style match. Players cannot completely lose their army nor can they build additional armies--the focus of the campaign is on upgrading and using the army to take over or defend territory.

Objectives for victory differ in each territory. while most simply require the player to destroy all enemy units and buildings, there are also take-and-hold victory conditions and objectives that require the player to hold key positions. The final goal is to conquer each enemy race´s fortress, thus eliminating the conquered race from the game. The remaining enemy territories will still be under their control however, and the player may choose to conquer them as well for the benefits those territories provide, or the player can move on towards the next race he wishes to obliterate. Note that if the player's fortress is conquered by an enemy, the player will be defeated and eliminated from the game. The more territories the player has, the "requisition" he will earn each turn, and during each round he may attack once, or move his army a set amount of spaces. Requisition can be used to reinforce the defense of territories under the player's control, as well as to buy special honor-guard units to accompany the army. Honor-guard units tend to have more special abilities and higher statistics than their "normal" counterparts.

As in Dark Crusade, special achievements such as a fixed amount of victories, kill-ratio and amount of conquered enemy fortresses will grant the player's Commander "Wargear," which are special pieces of equipment that will give the Commander upgrades and new abilities, making him or her a more durable, flexible and overall valuable asset over time.

In Soulstorm, the Sisters have come to clean the Kaurava system of all taint, purging all heretics and anyone that stands in their way. They play similarly to their other Imperial cousins, with their defining difference being the ability to collect "Faith," a third resource used to activate their units' strongest abilities: miracles from the Emperor and other "Acts of Faith." Another distinction the Sisters have is that while their relic unit, a Living Saint, is perhaps the weakest in terms of health, it has the supernatural ability to resurrect immediately upon falling, so long as its cooldown has expired.

The Dark Eldar are the twisted and corrupt version of their sister-species, the Eldar. The true cause of the collapse of the Eldar Empire, the Dark Eldar relish in their hedonistic ways, living in an impenetrable city, Commorragh, buried deep within the Webway. Their society revolves around anarchy, terrorism, and torture. Because of their ability to navigate the Webway, the Dark Eldar act as pirates, striking quickly and unexpectedly from the Webway, taking what they need and once again returning to their dark city.

The Dark Eldar lack some of the mobility the Eldar have in Soulstorm because of their lack of a Webway structure, but they make up for it with the ability to commission buildings without having to dedicate a builder unit to its construction (much akin to the Protoss in StarCraft) and their many high speed skimmers that allow them to launch fast assaults. Like the Sisters, the Dark Eldar have a unique resource as well, Souls. Harvested souls can be used to activate the strongest Dark Eldar abilities, including the titular Soulstorm ability. Soul abilities are not tied to a specific unit, instead they are activated from the main UI, just above where unit organization sits.

Listed below are the different races presented throughout the franchise. The second column contains which game the race originally made an appearance in, and thus which game one needs to have to be able to play the race in skirmish/multiplayer games. 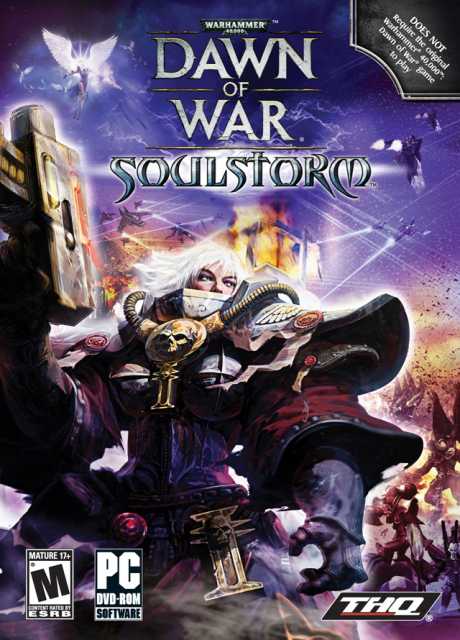