Mario Hoops is a basketball game developed by Square Enix featuring characters from the Mario franchise as well as some traditional Final Fantasy class types and creatures.
Nintendo DS

Developed by Square Enix, Mario Hoops is a game of 3-on-3 basketball in the arcade-style of other Mario Sports games. Players score points not simply by making shots and slam dunks, but are rewarded more points based on the amount of coins collected and difficulty of the shot made. There's also a heavy emphasis on items, ranging from lightning bolts, spike shells, red shells and bananas that can be used like in Mario Kart to trip up opponents.

The game features a multiplayer component, which allows players with just one DS card play a series of three mini-games. Players with two copies of the game can play a full 3 versus 3 game. The game does not feature any sort of online component.

Characters are controlled around the court with the analog stick, but all other actions are performed with the stylus.

The game starts with five characters available, but a total of sixteen more can be unlocked by playing the game. As well as characters, players can also unlock basketballs which have varying special appearances such as the yoshi egg.

Each team consists of three players. There are a few different types of characters to choose from, big characters such as Bowser and Donkey Kong are strong (they can make shields to block opponents quickly) but slow. Speedy characters like Diddy Kong are the fastest players. Technical characters are brilliant shooters with a much higher percentage of making shots. Tricky charters can do a trick to get past shields.

Tourney - A tournament mode. Playing through tournaments is an important method of unlocking different characters and items.

Challenges - This is the game's practice mode. Players are given tasks like performing special shots or evading an opponent. Finishing challenges is another way to unlock items. This also contains "Dribble Race," a short time-trial race where the goal is to collect 100 coins on a course in the fastest time possible.

A base 20 points are given for scoring a basket (30 from behind the 3-point line). Additionally, one point is added on for every coin collected during that possession. A player can have a maximum of 100 coins when he/she scores a basket. Coins can can be lost by being hit with green shells and other items.

Another way to score points is by doing a special shot. This requires the player to tap out a pattern on the touch screen specific to each character. Scoring a special shot will earn 40 points, but it takes a short while to tap out the pattern, which is risky.

There are a total of sixteen courts in the game; four in each tournament. Four courts are available at the start, but when completing events will unlock the rest. Although the courts are the same shape each one has its own hazards. For example, the pirate ship court has cannonballs fired at the court throughout the match. 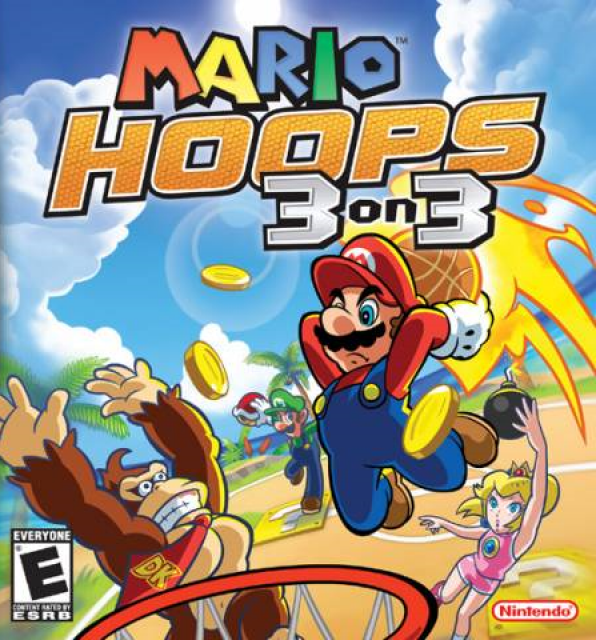