Fifteen years after the events of Suikoden II, the stories of Hugo (the son of a village chief), Chris (the virtuous Knight of Zexen), and Geddoe (the rebellious unit commander) intertwine as they gather the 108 Stars of Destiny.
PlayStation 2 PlayStation Network (PS3)

Suikoden III is the third entry in the Konami-published Suikoden series of role playing games, released for the PS2 in 2002. Suikoden IIIis the first of the series to use 3D graphics, and sported considerable changes to the series' traditional gameplay formula. The game received a generally warm reception, though was criticized by some for its changes to certain fundamental series elements, particularly with regard to gameplay. According to Famitsu magazine, Suikoden IIIsold almost 400,000 copies in Japan during its initial sales period and as part of The Best budget series. North American sales numbered in the area of 100,000 copies. It was unfortunately never released in the UK.

Taking place 15 years after the events of Suikoden II, the game is set in an area known as The Grasslands, northwest of Jowston, the region where Suikoden II takes place. The tribes of the Grasslands have just negotiated a truce with the mercantile Zexen Confederacy. Meanwhile, the Holy Kingdom of Harmonia (a northeastern Suikoden superpower) secretly plans an offensive of its own, 50 years after an enigmatic figure known as the Flame Champion who, bearing the True Fire Rune, led the united grassland tribes to repel a Harmonian invasion, spilling much blood on both sides. Tired of the war, Harmonia agreed to a 50-year detente, the upcoming expiration of which Harmonia eagerly awaits.

As tensions between the grasslanders and Zexen deteriorate into war, another faction, the Destroyers, secretly watches from the sidelines, manipulating events with an even greater, potentially world-ending aim in mind. This faction, the Destroyers, is led by Luc, a bishop of Harmonia. Seeing visions granted to him by his True Wind Rune, Luc realized that the future of the world was lifeless and desolate, and then set himself to stopping that future from happening by destroying himself and his True Rune, freeing the world from that future, regardless of the consequences (which presumably was the destruction of creation).

The game featured cameos and references to several familiar faces and locations in the previous games, such as Lilly Pendragon, the grown daughter of Gustav, a supporting character in Suikoden II's cast. It also has the ability to import cleared data from Suikoden II in order to unlock bonus content.

Suikoden III featured many changes to the formula of the previous games, including its standard battle and open war modes, as well as to the story progression itself (via the Trinity Sight System). It was also the only game of the series (outside of its spin-offs such as Suikogaiden and Suikoden Tactics) to feature multiple named, speaking protagonists.

The basic battle system was altered to use a continuous combat area, wherein characters moved freely about the field, in stark contrast to the original facing-side battling of previous games. Participants were also grouped into pairs, which could only be given a single order per turn, reducing the need to micromanage each individual's commands. Rune spells were also given specific strike radia, and allies as well as opponents could be affected by offensive spells if caught in the blast area.

The game's war clash sequences were also changed from a grid-based system to a node system, where units moved between static nodes. Nodes could project positive and negative effects on the occupying units. Clashes between army units resembled highly sped-up automated versions of standard battle, with individual pairs controlled by simple AI.

The most critical change to Suikoden III's gameplay came in the form of the Trinity Sight System, wherein the story played out via the perspectives of each of the game's 3 named protagonists. Each protagonist had 3 chronological chapters, and chapters could be selected and played in any order (until a critical point in the latter portions of the game). Certain other sub-characters gained their own sub-chapters, mainly to add flavor or to follow the development of the series trademark stronghold. The Trinity Sight System allowed the player to see the story from the viewpoints of 3 separate characters, each with their own motivations, opinions, and reactions to the shared experience of the game's plot. If the player managed to recruit all 108 Stars of Destiny before the point of no return, players were treated to a special sub-chapter detailing the actions and motivations behind the secret third group participating in the conflict.

In a departure from the previous games' largely linear progression, players were allowed to make several critical decisions as the game unfolds, eventually choosing which of the 3 protagonists becomes the next Flame Champion, thus determining the game's ending, though there is an official canon ending.

Suikoden III featured 3 named protagonists, a marked change from the previous games' usage of the singular, silent protagonist, named by the player (though given an official name by Konami for use in adaptations and spin-offs). The only character named by the player is the original Fire Champion who repelled the Harmonian invasion in the First Fire Bringer War 50 years prior. In fact, finding this first Flame Champion is one of the key goals in Suikoden III, though in the end, the Fire Champion has no direct involvement in the game. In fact, unlike every other silent protagonist in the series, the first Fire Champion has no official name.

Hugo is the only child of Lucia (a character from Suikoden II), and a member of the grassland Karaya clan. After his clan is attacked by Zexen Knights, Hugo is tasked by fellow clan member Jimba to seek out the original Flame Champion, and eventually learns the truth behind his disappearance following the First Fire Bringer War. Hugo vows to protect the grassland and end the war. In official canon, Hugo is chosen to be the next Fire Champion, inheriting the True Fire Rune and leading the united grasslanders and Zexen armies to victory over Harmonia, and ending the Destroyers' plan to end the world.

Chris is a Zexen Knight, born to Wyatt Lightfellow, a Zexen captain who disappeared during her childhood. Dedicated to the path of knighthood, Chris shies away from many of the more domestic activities regular girls undertook. Haunted by her having to take the life of Lulu (one of Hugo's lifelong friends) during a battle at Karaya village, Chris finds out her father is still alive, and that she must find the Flame Champion to learn his whereabouts. Chris finds out that Wyatt Lightfellow had changed his identity, becoming Jimba, a fellow clansman of Hugo, and bearer of the True Water Rune. She inherits the True Water Rune (in canon) from Jimba/Wyatt, and joins forces with the grasslanders to fight the Harmonian invasion and end the war.

Leader of the 12th mercenary company in the Harmonia Southern Frontier Defense Force. Along with his fellow mercenaries Geddoe is slowly drawn into the conflict, choosing to investigate the Destroyers and their role in instigating the Zexen-Grassland war (and later the Harmonian invasion). A typically "strong-and-silent" stoic figure, Geddoe actually participated in the First Fire Bringer War alongside Wyatt Lightfellow (father to Chris and later Jimba to Hugo) and the original Flame Champion. The fact that he never aged a day in the 50 years since then reveals later that he bears the True Lightning Rune (True Runes typically render their hosts immortal, immune to aging and disease). Geddoe joins forces with Hugo and Chris to put an end to the war and Luc's plans.

Thomas is a young boy sent to the Grasslands to meet his father, the head of the Zexan Merchants Guild. He is put in charge of Budehuc Castle. Under his leadership the castle became a thriving center of free trade and commerce. His castle eventually becomes the headquarters of the new Fire Bringer.

The original soundtrack of Suikoden III was composed and arranged by Michiru Yamane, Takashi Yoshida, and Masahiko Kimura. It was released in Japan as a 2 CD set on July 24th, 2002.

03 - The Wind and the Earth (Karaya Village BGM)

05 - City on the Bridge (Fort of the Zexen Knights)

20 - Beneath the Moonlight (Holy Knights of Roa BGM 2)

19 - A Quiet Night Under the Moon (Headquarters - Night BGM)

The 108 Stars of Destiny

The following is a complete account of all the characters that will join the quest.

A manga series based on Suikoden III was released in the United States by Tokyopop in 2004. It spanned 11 volumes and was written by Aki Shimizu. 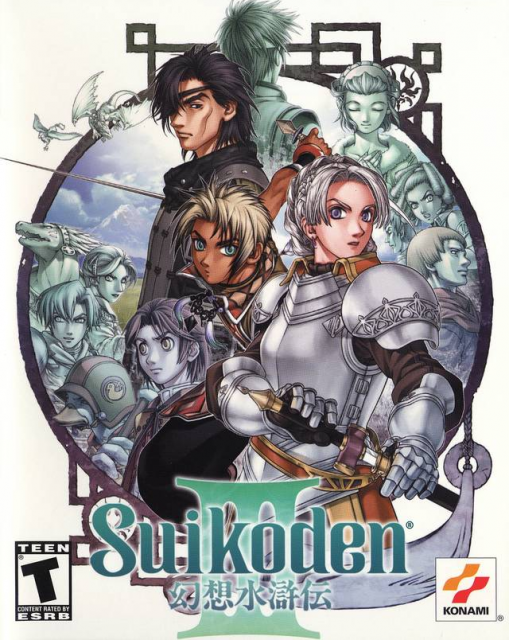