The hot-blooded sequel to the original Fatal Fury, heavily improving the fighting mechanics of the original while adding a bigger cast of playable characters and worldwide locales.

Fatal Fury 2 (known in Japan as Garou Densetsu 2: Aratanaru Tatakai, which loosely translates to "Legend of the Hungry Wolf 2: The New Battle") is a 2D fighting game developed and released by SNK for arcades (using the Neo Geo MVS hardware) on December 10, 1992.

The second installment of the Fatal Fury series, Fatal Fury 2 heavily improves the fighting mechanics of the original (including a traditional control layout with four basic attack buttons, the ability to move freely between fighting areas with special commands, and a less restricted character roster) while introducing some mechanics from Art of Fighting (including dashing and powerful situational super moves). A major update to the game, titled Fatal Fury Special, was released a year later.

Set after the death of crime boss Geese Howard in the original Fatal Fury, a new worldwide "King of Fighters" tournament is held by mysterious German nobleman Wolfgang Krauser (who is seeking the fighter responsible for Geese's defeat). Along with the three original protagonists (Terry Bogard, Andy Bogard, and Joe Higashi), players can pick one of five new fighters to progress through the tournament, including Japanese ninja Mai Shiranui, Korean taekwondo master Kim Kaphwan, and Australian wrestler Big Bear (formerly known as the masked wrestler Raiden).

Along with the standard Neo Geo AES release (on March 5, 1993) and Neo Geo CD port (by SNK on September 9, 1994), the game received a worldwide port to both the Super Nintendo Entertainment System and Genesis in 1994 by TAKARA. Japan-exclusive ports were also released for the Sharp X68000, PC Engine CD-ROM² (requiring the Arcade Card add-on), and Game Boy (where all characters are redone in a "super deformed" style). The original Neo Geo version was also included in the Fatal Fury Battle Archives Volume 1 compilation for the PlayStation 2 and was digitally released for the Wii (via the Wii Virtual Console) on June 30, 2008.

Unlike the previous game, Fatal Fury 2 now makes full use of the Neo Geo's four-button configuration by removing the dedicated throw button and separating the Punch and Kick buttons to Light and Strong. Throws are now performed by holding forwards or backwards on the joystick while both fighters are close and pressing Strong Punch.

New techniques to the series include dashing backwards (by tapping backwards on the joystick twice), crouch walking forwards (by holding down+forward on the joystick), and taunting (by pressing Strong Punch from afar). Also new are "Defensive Attacks", which allows players to counter-attack a whiffed attack by holding forward and pressing Light Punch while blocking, and "Desperation Attacks", powerful super moves that can only be executed when the player's life gauge is nearly depleted (as indicated by a flashing red life gauge).

The "dual line" fighting system from the original Fatal Fury also applies to the game. However, players can now move freely among lines. When both players are in the same line, pressing both Light Punch and Light Kick simultaneously lets the player jump to the opposite line. From there, either player can follow up by performing a special attack (by pressing either Punch or Kick button with certain joystick combinations) or by rolling harmlessly (by pressing either Up or Down on the joystick). Players can also knock other players into the opposite line with a "Strong Attack" (by pressing both Strong Punch and Strong Kick simultaneously). Only the first three boss characters have "one-line" stages with obstacles.

Fatal Fury 2 contains eight playable characters and four CPU-only boss characters, which can only be playable in the SNES, Genesis, and Game Boy versions with a cheat code. Much like the Street fighter 2, Fatal Fury 2 made a point of picking fighters from around the world, selecting many different nations for fighters to represent. Fatal Fury 2 was notable for introducing popular characters Mai Shiranui, and Kim Kapwhan. These characters would go on to become regulars in the popular King of Fighters Series. 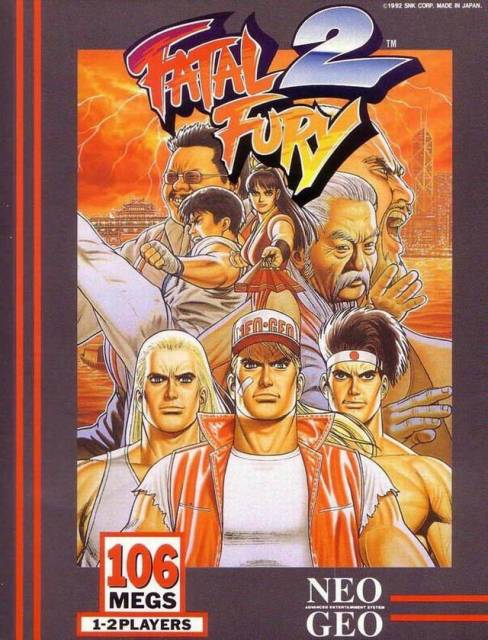