The third game in the Boktai series. It was never released outside of Japan.
Game Boy Advance

Shin Bokura no Taiyou: Gyakushuu no Sabata (aka "Boktai 3") is the third in a line of action-RPG's conceived by Hideo Kojima, for the GBA. Despite never being released outside of Japan, Boktai 3 has garnered a cult following in English-speaking countries, so much so that a fan-translation was released to the internet. It maintains the tradition of utilizing an in-cart solar sensor in gameplay.

An undetermined amount of time after the events of Boktai 2, main character Django finds himself sealed in an underground prison by Sabata. Sabata, falling to the Dark Matter that corrupts his body, has once again sided with the Immortals, a vampiric race, and wishes to release the Beast of Destruction, Vanargand, with the intent of becoming the Beast itself. Django recovers and then sets out on a quest to stop Sabata and the Immortals once again, whether that means killing Sabata or not.

Boktai 3, like its two predecessors, is an action-RPG played from an isometric perspective. Players will control Django to traverse an array of different dungeons. Like the first game, Boktai: The Sun is in Your Hand, Django will wield the Gun Del Sol (lit: Gun of the Sun) and swords (a feature introduced in Boktai 2 ), in addition to using light stealth elements such as pressing against walls and distracting enemies with noise to sneak by.

Unlike Boktai 2, the Gun Del Sol is, once again, customizable with different lenses (change elemental properties), and different frames (change attack style). However, unlike Boktai 2, spears and hammers are no longer availible as melee weapons; the swords, though, now feature a wide array of effects and attack methods.

As in past entries, the Boktai 3 cartridge holds a solar sensor. With it, players can use actual sunlight to affect the game. When Django is outside in the sunlight--or by some source of sunlight while inside--players can refill the Gun Del Sol's energy meter, dry up small water bodies, hasten or slow wind speed, speed up or delay timed hazards, or create "solar bridges". How much sunlight is hitting the solar sensor is represented by a 10-segment bar at the bottom of the screen.

In dungeons, Django will sneak around, combat enemies, and solve puzzles. Occasionally, the player will find themselves in a "Trap!" room or a Mission, where the player will be put against a mini boss(es), or asked to fulfill certain objectives to proceed, respectively. At the end of each dungeon waits a boss, usually one of the Immortals. Django will be put into a life-or-death struggle in entertaining, diverse fights. When the battle is over, the boss is sealed in a coffin, and Django must then drag the coffin back through the dungeon, to the entrance (usually following a second, otherwise inaccessible, route through). Once there, Django will set up the "Pile Driver", a device used to destroy the Dark Matter that makes up an Immortal--the only way to actually destroy them--in another fight. Here, is one of the times where sunlight hitting the sensor is mandatory . The boss' life will drain only if sunlight gauge has at least one full segment.

New to the series, is the complete lack of explorable land outside dungeons. Past games had a full overworld and/or a central hub-town to run around in, and sometimes mini-dungeons other than the main Immortal dungeons. This game does not. The main town is a series of menus and small "playable" rooms. In between trips between the town and dungeons, are bike segments, new to the franchise, and unique to this game. Players will ride a bike, completely customizable, in a course-like stretch of land, fighting off enemy bikes and avoiding obstacles.
The Legend of Zelda: The Minish Cap The Legend of Zelda: A Link to the Past Dragon Ball: Origins Slime MoriMori Dragon Quest: Shougeki no Shippo Dan Tales of Phantasia Dragon Quest Heroes: Rocket Slime Juka and the Monophonic Menace Back to Stone Sigma Star Saga Sword of Mana Shining Soul 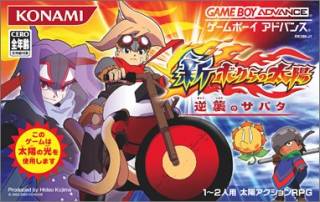