A side-scrolling action game featuring the ninja Tsukikage. The player carves a path through numerous enemies to each boss using various ninja tools at their disposal, such as shadow doubles, shurikens and bombs.

Ninja Spirit is an action game originally developed and published by Irem Corporation. It was released in the Arcades and was ported to various European home computers (which were published by Activision), the Game Boy and the TurboGrafx-16/PC Engine. The TG16 version was eventually ported to the Wii's Virtual Console. Featured game in Irem Arcade Hits for Mac and PC.

The player takes on the role of Tsukikage (Moon Shadow), the canine companion of a slain ninja. The dog takes on his master's form to avenge him by taking on an army of demonic ninja.

Players can press the select button at any time to switch between one of four weapons (the Righteous Cloud [katana], Swirling Leaf [shuriken], Bamboo Thunder [explosives], and Kusarigama [chain-scythe]). Each weapon can be aimed using the direction pad to attack forward, up, diagonally, and downward, and they can be powered up by collecting red orbs dropped by bright red ninja.

In addition, the hero can multiply by collecting blue orbs dropped by the bright red ninja enemies. Up to two shadow ninja can appear at once, which copy the protagonist's every movement and attack, tripling his attack power. A pinkish orb kills all enemies on screen for a couple of seconds.

The PC-Engine version port is the closest to its arcade counterpart and allows infinite continues as well as two difficulty settings: one where the player has 5 hit points, and another more difficult mode taken directly from the Arcade version where the protagonist is killed in one hit. Certain enemies still kill the hero in one hit regardless of which mode is played. 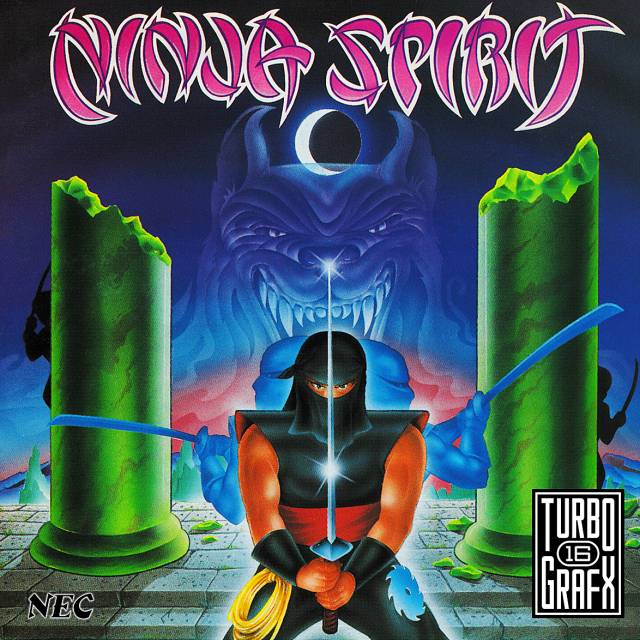