Joust is an arcade game that was released in 1982 by Williams Electronics. It features a knight using a lance while riding on an ostrich.

Released in 1982, this two-dimensional platform game played from a third-person perspective. The main character is a knight, but unlike medieval knights he rides a yellow flying ostrich. The object is to get to the next level , called a wave, without being defeated by enemy knights, who ride mounted upon flying vultures.

The object of Joust is to defeat all of the other jousters on the stage. This can be done by making contact with them while the player's jouster's jousting spear is higher than the enemy's is. As long as this is the case when the player's jouster collides with an enemy, they will be defeated. To ensure that an enemy jouster will not return, however, it is necessary to pick up the egg that is dropped when they are defeated. If the egg isn't collected quickly, it will hatch into another jouster and another buzzard will quickly arrive to pick him up and return him to the fight.

There are lava pits on either side of the island on the lowest level of the battleground. In the early stages these pits will be sealed so that falling into them is impossible, but eventually they will open up and become a hazard to both the player and the enemies. Living in the lava is a lava troll who will grab any character that flies too close to it, players and enemies, and attempt to drag them down into the lava. It is possible to escape the troll when caught by flying hard enough.

An enemy pterodactyl appears if too much time elapses in a stage. The beast appears to be unbeatable, but it can actually be killed by stabbing it directly in its mouth when it is open. This is difficult however because the creature moves much faster than other enemies. It will also leave if all the other jousters on the stage are defeated.

Joust has appeared on nearly every popular gaming system to date in some form or another. Usually it is packaged into a "best of" package but more recently it has been sold stand-alone on popular download services such as Xbox Live Marketplace and on the PlayStation Network.

Joust was ported and released on the Xbox 360 via the Xbox Live Marketplace. The game was upscaled to appear in HD and was sold for 400 Microsoft points or $5. Though the game was removed from sale in 2010, it was re-released in August 2016, and is now playable on the Xbox One via backwards compatibility. 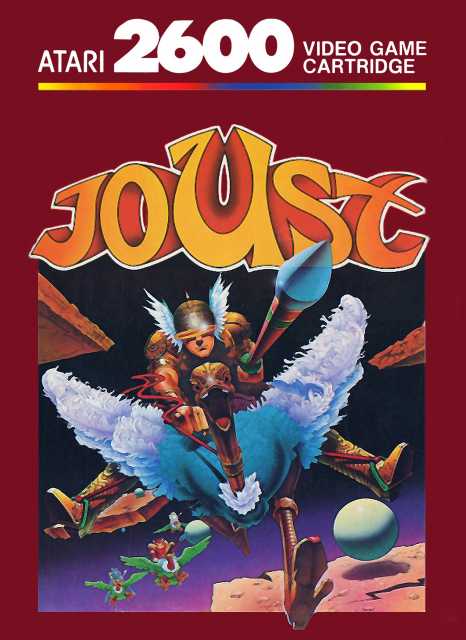