Explore the world as Spot, the tiny mascot of the 7 Up brand of soft drinks, and rescue its fellow Spots in this 2D platformer.

Cool Spot is a 2D side-scrolling platformer developed and published by Virgin for the Super Nintendo Entertainment System and Sega Genesis in 1993. It is the second game to star Spot, the tiny anthropomorphic red dot and then-mascot of the 7 Up brand of soft drinks. As one of the many Spots, players must guide it around the world, rescuing other Spots from their unexplained imprisonment in cages.

The game was later released in 1995 for the Sega Game Gear, Game Boy, Sega Master System (Europe only), Amiga (Europe only), and PC (Europe only). It later received a sequel, titled Spot Goes To Hollywood, for Genesis, Saturn, and PlayStation.

While the game was a licensed promotion with the soft drink, European versions removed the branding (since the European version of 7 Up did not have Spot as its mascot).

Spot can jump and attack by firing soda bubbles which can be shot in all directions and while jumping. Cool Spot can also cling to and climb on various things.

In each level, the player must rescue other cool spots, who look exactly alike, from cages at the end of that level. The end of the level is not necessarily the point at the far right of the level map. In order to do so, the player is required to collect a certain number of "spots" that change (usually increase) as the game progresses. "Spots" are placed across the level in large quantities, and are the game's substitute for items such as Sonic the Hedgehog's gold rings (these were often used in this style of game, mostly for points). A player's health is monitored by a humorous Cool Spot face that gradually bends forward and will eventually fall from its position as damage occurs. Damage is taken by touching enemies, their projectiles, or certain level obstacles. Each level is played with a time limit. If the clock hits zero, a life is lost regardless of the player's health.

The game has no save feature but does use checkpoints in the form of flagpoles. Once passed, the flag raises and a trumpet sounds. If a player loses a life after reaching a checkpoint, the player can restart further in the game. 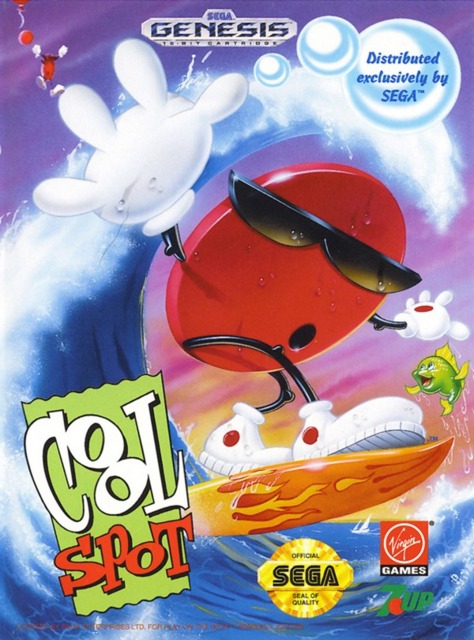