Simon Belmont must rid himself of a horrible curse placed upon him by Dracula in this action-adventure platformer and sequel to the original Castlevania.

Castlevania II: Simon's Quest (known in Japan as Dracula II: Noroi no Fuuin, the sub-title loosely translated to "The Accursed Seal") is a 2D horror-fantasy action-adventure platformer developed and published by Konami for the Famicom Disk System in Japan on August 28, 1987. It was later released for the Nintendo Entertainment System in North America (on December 1, 1988) and Europe (on April 27, 1990).

The direct sequel to Castlevania, Simon's Quest abandons the traditional stage-based linear platforming system of the original Castlevania for a free-roaming platforming system built upon exploring a large 2D world while collecting items to progress (similar to fellow NES platformer Metroid, hence the "Metroidvania" sub-genre). This style of gameplay did not return in future Castlevania games until Castlevania: Symphony of the Night.

Set in the year 1698, the game opens seven years after heroic vampire hunter Simon Belmont traversed the castle of Count Dracula and defeated him. Simon realizes that during the encounter Dracula placed a fatal curse upon him. Players resume control of Simon as he tries to rid himself of his curse by gathering the five remains of Dracula's body and burning them in the ruins of Dracula's castle, all while fighting the Count's dark minions haunting the land. It is one of the earliest games to feature multiple endings, in which Simon's fate is determined by the amount of time spent playing the game.

The game was later digitally re-released as a Virtual Console title for the Wii (in 2007-2008), the Nintendo 3DS (in 2013-2014), and the Wii U (in 2014). It was also included in the North American and European versions of the 2016 NES Classic Edition micro-console and was included in the 2019 digital compilation Castlevania Anniversary Collection for the Xbox One, PlayStation 4, Nintendo Switch, and PC.

Simon's Quest was a unique platformer for its time, boasting a number of fresh, innovative ideas. While its predecessor was a straightforward platformer, Simon's Quest is more comparable to Metroid with its exploration elements. The player has the freedom to travel around to different towns and dungeons. Simon can talk to townspeople for hints and directions in his quest. There are merchants in the towns who sell items useful for Simon's quest. The game uses hearts as currency, collected when they are dropped by defeated enemies. Small hearts are worth two heart points, half large hearts are worth four, and big hearts are worth eight points.

The game was among the first games to employ RPG elements without also being strictly an RPG itself. The game has an experience rating system which uses hearts to raise Simon's level. When Simon levels up, his health will increase and the number of hearts required for the next level will also increase. Simon can also upgrade his weapons, such as finding new whips in a number of locations throughout the game.

Simon's Quest featured a very complex and innovative day and night system. Each phase will only last a few minutes, but they have a substantial impact on the gameplay in each level. During the daytime, the enemies outside of town are weaker and fewer. During the night, enemies become more dangerous, and appear more frequently. During the night, the townspeople and merchants will be unavailable, as they presumably are getting a little bit of shut-eye. Unfortunately for Simon, zombies wander the towns at night too.

Fortunately for Simon, most of his sub-weapons do not require his hard earned hearts to use. The exception being the golden magic dagger. Additionally, the parts of Dracula's body that Simon gathers provide some extra utility, such as the projectile blocking rib bone and the eyeball of Dracula which allows Simon to see some hidden objects. 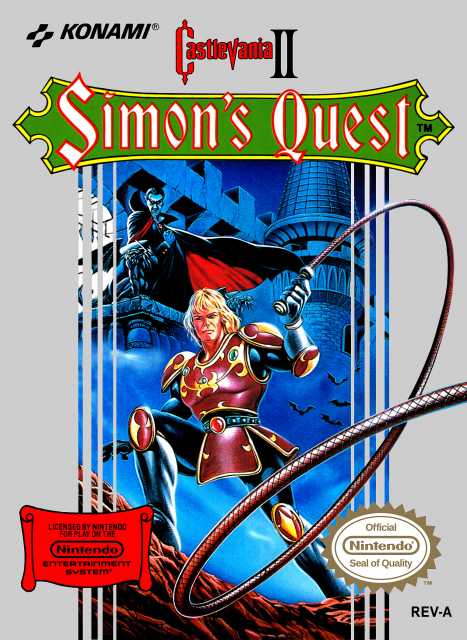