A party-based re-release of the original WarioWare GBA game. Features the same microgames as the GBA original, and several multiplayer party modes.

A multiplayer-focussed version of the original WarioWare for Game Boy Advance. Rather than a full new game, Mega Party Game$ simply takes the original 213 microgames and builds a new selection of party games around them. Some supplements to the original game, such as a sound test and character bios are also included in the package. The single player game is almost exactly the same as the GBA original, but this release ditches the stories and instead uses a generic elevator design for every stage. The remix stages are also still present, but with a couple of additions. The entire game can be played using a GBA system as the controller using a GC-GBA Link Cable.

The story elements of the original game have been removed from this version, but there are some cutscenes that tell a bizarre short story in several parts:

While WarioWare, Inc. Mega Party Game$ is focused on the mutliplayer modes, a variety of single player modes are available.

There are also some other unlockable goodies:

The Album mode is similar to the Grid mode of the original game, which allows the player to play any microgame on a progressively harder loop ti try and beat a high score. The Album offers better sorting options, giving the option to sort each set by Title, ID number, or High Score. As well as the normal single-genre books, Mega Party Game$ allows the player to view all the microgames together listed as full summaries or screenshots.

For each player profile (up to 16 can be saved), the Game Data screen keeps track for a variety of stats, which rank the player on Timing, Control, Speed, Intelligence and Stamina. It also provides high scores for the single player modes and win percentages for multiplayer, in addition to how they rank among the other players.

Appearing in the Options after being unlocked, the Sound Room allows the player to listen to all the music tracks and sound effects in the game.

This game contains the exact same 213 microgames as it's GBA counterpart. A complete list of every game is on that page.

New for this game are 15 2-4 player microgames. Since they are not listed in the Album, the names below aren't official (some names are taken from the sound test). In games where the players take turns, the first player is randomly selected.

Like it's GBA counterpart, Mega Party Game$ includes a couple of Japanese songs with vocals. The two songs from the original games appear as music videos in this game too.

This is the music to Kat & Ana's multiplayer stage. The English name is "Stealth Turtles".

This track only has a single line of speech. The English title is "Love is a Mystery". 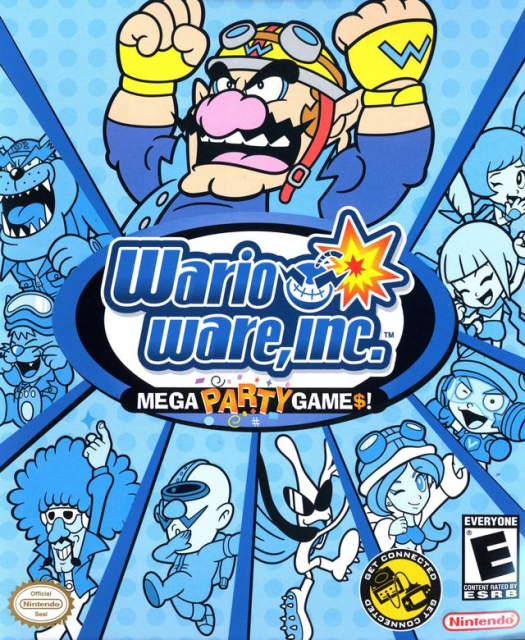