An early racing title for the Nintendo 64, combining challenging circuits and realistic water physics for a unique watercraft racing experience.

The sequel to the 1992 Game Boy game Wave Race, Wave Race 64 revamps the original game's racing by adding slalom-based navigation (requiring players to zig-zag around buoys to prevent disqualification), realistic water physics (with water waves affecting PWC movement), and multiple playable characters (each with their own unique stats). It also adds the ability to perform stunts and split-screen two-player multiplayer.

The Japanese version of the game features in-game advertisements for Kawasaki (and their Jet Ski brand of PWC) as well as the Fanta Orange beverage, the latter of which was removed in the International versions. The Japanese version of the game was later re-released in July 1997, supporting the Rumble Pak accessory and adding Time Trial Ghosts while changing some sound effects, dialog, and music. The game later received a sequel for the GameCube in 2001, titled Wave Race: Blue Storm.

The game was later digitally re-released as a Virtual Console title for the Wii (in 2007) and Wii U (in 2015-2016). All Kawasaki, Jet Ski, and Fanta Orange branding was replaced with generic Nintendo hardware branding (with the branding on the PWCs themselves removed entirely).

The race events of Wave Race 64 are standard races to the finish line against three opponents, with a twist. The player has to maneuver their jet ski past buoys, passing each buoy on alternating sides. Passing buoys on the the appropriate side in succession will grant power boosts, increasing speed, but missing one will result in a power-down. The player will earn points at the end of each race dependent on their finishing position, and the racer with the most points at the end of the tournament wins.

The stunt events take place on the same tracks as the races, but this time the only goal is to score as many points as possible by doing tricks off of ramps and going through rings.

Similar to F-Zero, players choose from one of four racers, each with their own unique stats.

In this mode the player races on a set of courses against three other computer controlled racers. At the end of the race points are given to each player depending on where they placed during the race and then tallied. If the player did not get enough points it would be game over.

The warm up mode was the games tutorial mode that familiarized the player with how to control their jet ski. While there were objectives in this level they were optional and players were free to explore at their own leisure.

The player has to race against the clock in order to finish with the quickest possible time.

The player races on the course driving through colored rings and attempting to preform stunts using ramps and natural waves.

The game only allowed for two players to race at the same time. This is probably due to low frame rates if the game had to account for 4 individual player screens.

The game includes eight courses, two of which can only be unlocked by completing Championship mode in higher difficulties. All unlocked courses, including the separate Dolphin Park practice area, can be played in Stunt Mode.

In addition, the game includes a dedicated area for the game's practice mode. Called Dolphin Park, it features multiple ramps and obstacles to practice with. It can also be played in Stunt Mode. 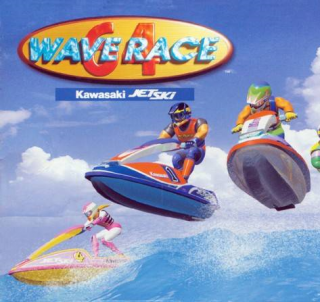