Tony Hawk's Project 8 was the first game in the Tony Hawk series built from the ground up for 7th generation of consoles. The game introduced the Nail-The-Trick mechanic and added graphical details like Bloom HDR lighting and ragdoll physics.
PlayStation Portable PlayStation 2 Xbox 360

Project 8 was developed by Neversoft for the PS3 & Xbox 360 and by Shaba Games for The PS2 and Xbox. It features an open world free of load times on the PS3 & 360 though most areas are locked at first. While the game acts as one large world it still has clearly defined areas, some of them modeled after levels from previous installments.

The concept and title of the game revolves around it being the eighth installment in the series. In the game's 'Project 8 competition' the player starts out at the 200th spot and must work his/her way up to the top 8 by completing a massive amount of objectives and defeating other skaters in competition. The Nail-the-trick mechanic plays an important role in goal completion as well as adding a new level of depth.

Free Skate Mode, Unlockable skaters and videos all made their return and all though some challenges involve minor level creation the game did not feature a proper level creator. Pro Tricks Mode allowed the player to watch the newly rendered Pro Skaters performing trademark tricks and offered camera manipulations. The PS3 version of the game did not feature online play but did include a Split Screen multiplayer mode for up two players locally. The 360 version had online play for up to 8 players.

Nail the trick (NTT) mode was the largest new addition in the game. The mode is activated in air, by pressing both analog sticks simultaneously. This slows down time and zooms in on the player's board and feet. From this angle the player can rotate and flip the board with precise left and right analog control. In order to create and promote the NTT mode, a group of known skaters came together for an MTV event to demonstrate the mode, and talked about how it was created. New motion-capture tools were employed on all featured skaters.

By pressing the left analog stick Focus mode allows the player to simply slow down time though the Special Bar must be full in order to do this. It is useful when trying to extend a combo with more precision.

The player can propel himself in the air by intentionally bailing against a surface at a high speed in order to score points. While bailing, random buttons can be tapped to keep on bouncing off of surfaces as long as the player maintains enough speed. This mechanic is required in some of the challenges.

To attain the 8th spot in the rank the player must complete all goals at the Amateur level. This will result in a face off with Tony Hawk and roll the credits. However, if the player finishes all the goals at their Pro difficulty he will rank at the 4th spot and meet Tony Again. At last, to achieve the number one spot and fully complete the game the player must beat every goal at the sick difficulty. The challenge types are scattered around the world and vary widely. Players can set a marker to any objective's location. Stats are earned automatically over time as longs as the player is performing the disciplines. For instance, if the player never performs manuals, he will not increase his stats for this discipline.

They are scattered around the world and are activated by performing the adequate trick on any object marked with green chalk. Upon activation the player must at least reach the Orange marker (Amateur) but can immediately continue to reach for the Blue (Pro) and Yellow (Sick) markers. The challenges come in the form of Grinds, Manuals, Natas Spins and more and requires them to be perfomed as a combo. If the player bails it will be considered a fail.

The player follows a filmer around an area, who draws a marker line as he goes. A set amount of tricks must be performed before the timer runs out.

The player is asked by a photographer to perform a specific trick over a specific gap.

A throwback to old school tony hawk games in which the player is presented 10 objectives and has two minutes to complete as much as he can. The Sick difficulty requires the player to perform all 10 in one run.

Each Pro skater has three challenges for the player that are given gradually over time.

The player must end in the top 3 to win.

The game features many other one-time challenges such as wallplanting on posters, races and some off-board activity.

Below is a list of the defining areas of the game world in the PS3 & 360 versions.

Modeled after the 'Suburbia' level from THPS 3, Suburbs is the starting point for the player. Its main sections are a backyard area focusing on half pipes, and a pool area that contains three empty pool bowls for transfers.

A small fictional skatepark. It features a downhill set of halfpipes and a flat surface area, good for flip tricks, at the top.

Acts as an intersection to other areas in the world. Features mostly grindable objects such as a tram rail, but allows access to many rooftops which in turn feature bowls and rails.

Features mostly quarter pipes and a large grindable momument that also acts a quarter pipe. The Capitol's rooftop can be accesed and its indoor area is comprised of a giant bowl.

An outdoor parking lot at the top of the game world's hill. Mostly quarter pipes and other small objects such as cars and kickers.

Modeled after THPS 1 & 2's classic school levels. It's a large area with lots of grinding opportunities and accesible rooftops. Features indoor areas as well where a large bowl and half pipe can be found in the pool and gym area, respectively.

Perhaps closer to THAW in terms of level design and esthetic, Slums focuses mainly on grinds, kickers and half pipes.

Essentially a remake of THPS 3's 'Foundery' level, Factory is mostly comprised of a multilayered set of rails good for exstensive grinding.

Rollercoasters and other attractions make this a grind heavy level but it features many bowls and half pipes as well.

Tony Hawk's Project 8's only inclusion of a licensed character is the Grim Ripper from the Guitar Hero series. Other unlockable characters include citizens from within the game world and zombie Officer Dick.

The real life Skaters are listed below.

Project 8 was met with mostly positive reviews though the lack of an Online Mode on the PS3 and the frequent framerate drops across all platforms, were two recurring subjects of criticism. The Nail-The-Trick mechanic was praised for being innovative.

Some controversy was made when people discovered that they are not able to pick their sponsors (like in previous games), and were instead prompted with a sponsor whenever they reached a certain level. This caused the players to think that some brands are more preferable then others. Known skate brands such as Element and Almost have responded to this, reporting that they weren't aware of this and that they'd prefer if the player would be able to pick their brand. 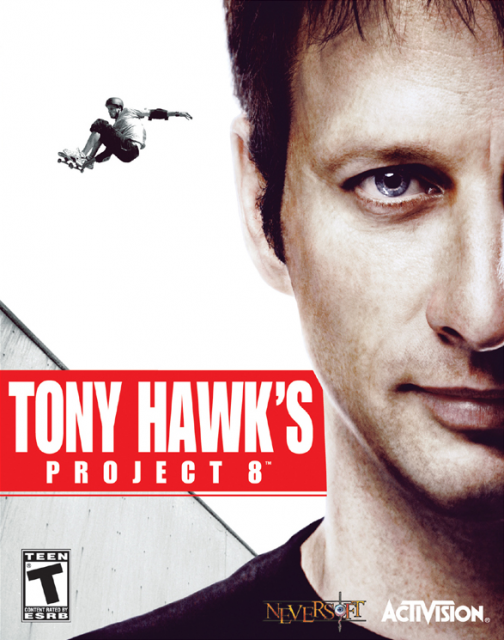