A dungeon-crawler for the Famicom and the last in the Deep Dungeon series. Retains the open-world structure and multiple-character parties from the previous entry.

Deep Dungeon IV: Kuro no Youjutsushi ("The Black Sorcerer") is a Japanese only role-playing game exclusive to the Nintendo Famicom. It is the fourth game in the Deep Dungeon series of first-person, turn-based dungeon crawlers from HummingbirdSoft, though the first to not be published by Squaresoft either directly or via their DOG coalition publishing label - instead, the game was published by Asmik.

The game removes a few features from the previous Deep Dungeon entries, including creating the player's own character (instead, they simply name a pre-generated protagonist) and a variable encounter rate that dips when the player is too overlevelled for the current area. Other characters are recruited during the game, and the player can even temporarily recruit monsters to fight for them in a single battle. Like Deep Dungeon III the game is largely non-linear and offers multiple dungeons to explore, including outdoor areas.

The game has been fan-translated a few times, though the most complete version is the 2011 release from KingMike. They also translated the previous three games. 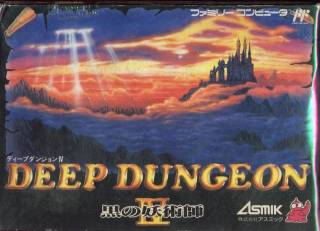