The first entry in the widely popular Madden franchise.

John Madden Football is also the only Madden game to release on the Commodore 64 and Apple II.

An enhanced version of the game was developed for the Sega Genesis and Super Nintendo Entertainment System platforms. This version still lacked the NFL license, but included various new improvements that would later make their way to subsequent annualized games, like its immediate sequel John Madden Football '92.

Although the Madden games are now known for their up-to-date rosters of real NFL teams and players, John Madden Football does not include actual NFL teams or players because no NFL or NFLPA licenses existed for the franchise at the time. There are, however, teams that are based off of actual NFL teams.

Real teams aren't the only difference between this version of Madden and latter day versions; there is also no season play in John Madden Football. The only mode of play is single games.

The game has a "blank" team that the player can create from scratch and either play as them or let the computer take over. It's possible to change player numbers, names, positions, and ratings.

Although the game comes with two playbooks, one for offense and one for defense, there is a play creator for anybody to create their own.

Players can save their games at any time using a separate disk.

The game featured other options that disabled fatigue, penalties, injuries, cross-hair passing, or the 30 second clock. 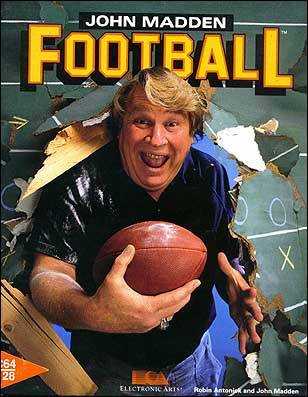