Secret of the Stars

Join Ray and his fellow Aqutallion crusaders as they embark on a dangerous journey to defeat the evil entity Homncruse.

Secret of the Stars is a traditional turn-based JRPG released by Tecmo in 1993. Though much of it is based on Super Famicom contemporaries like Final Fantasy IV and Dragon Quest V, it featured a few interesting features like an option to switch to auto-combat for encounters and an entirely separate team of heroes that the player could control. It was also one of the few JRPGs at the time to merge fantasy with steampunk technology.

It was Tecmo's only foray into RPGs in the early nineties, possibly due to its poor critical reception. In Japan the game is known as Aqutallion. In-game, the Aqutallions are the hero's party of adventurers.

Secret of the Stars has a standard JRPG interface. Most of the game takes place from a top-down exploration mode, and when the player's party is on the overworld or in a dungeon random battles will switch the gameplay to a turn-based combat system similar to any of the early Final Fantasies or Dragon Quests.

Secret of the Stars does have two interesting, uncommon gameplay elements: Like in some entries in the Breath of Fire series, Secret of the Stars has the player slowly develop a town in the later parts of the game. Throughout the game, the player also switches between two active parties that have different roles in the story (although there aren't substantial non-plot differences between the parties). 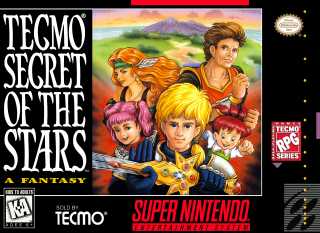