Syphon Filter is a third person shooter for the original PlayStation. Its action-oriented gameplay set it apart from Metal Gear Solid.

Developed by Eidetic and published by 989 Studios in 1999, Syphon Filter is a third-person action game for the Sony Playstation. A PlayStation Network version was released on December 4th, 2007.

A terrorist cell has stolen a top-secret bio-weapon and is planning to unleash it in Washington, D.C. Playing as agent Gabe Logan, you must stop the terrorists' plan and recover the virus. Fight or move stealthily through varied environments with support from your partner Lian Xing to accomplish your goals.

The game had stealth elements where the player was forced to get through levels without being spotted. For the most part, though, the game was a third person shooter.

There were also a few "boss fights" throughout the game with characters that worked for the terrorist group leader, "Erich Rhoemer." They included a fight with Mara Aramov, Anton Girdeaux, and Rhoemer himself.

The fight with Aramov had the player, as Gabe Logan chasing after her in a subway tunnel. The player would have to avoid oncoming subway trains by going back and forth between tracks. Aramov also had a "flak jacket" on which made going for a head shot the easiest way to beat her.

Anton Girdeaux was another fight that takes place within the game that changes up the pacing. Girdeaux is a master with a flamethrower. During this fight Logan must find a way to dodge Girdeaux's constant barrage of flames. Meanwhile, Girdeaux also has full body armor on, meaning he can't be shot just anywhere to cause damage. Players had to shoot his flame pack.

Erich Rhoemer, who was the mastermind of this rag-tag terrorist group, was also an interesting boss fight. Logan must find a way to defeat Rhoemer who is not able to be killed with mere bullets from your gun. Players had to look for a special weapon in order to defeat him.

In the heart of Central America (Costa Rica), an American special agent dies on a mission to recover evidence of the creation of a powerful biological weapon. Agents, Gabe Logan and his partner Lian Xing discover his remains among many others on their mission to investigate what happened to their colleague. Further investigation connects this event with a deadly terrorist by the name of Erich Rhoemer and his forces who are known to be planning an attack on the United States by releasing a deadly virus called Syphon Filter.

In response to the national threat, the agency sends their most trusted and greatest operative, Gabe Logan, to eliminate the terrorist threat by eliminating key terrorist figures across the country. Logan assisted by teams from the U.S. Army Chemical And Biological Defence Command (CBDC) and his long time partner Lian Xing accepts the mission to stop the massive threat against his country.

Syphon Filter was very well received, earning high scores from many game publications and being named #19 on IGN's list of the top 25 PlayStation games of all time.

Syphon Filter was also a part of a Playstation demo disc that was sent out by Toys R' Us to various customers during the Winter of 1999.

The ESRB rated the game Teen for Blood and Violence. 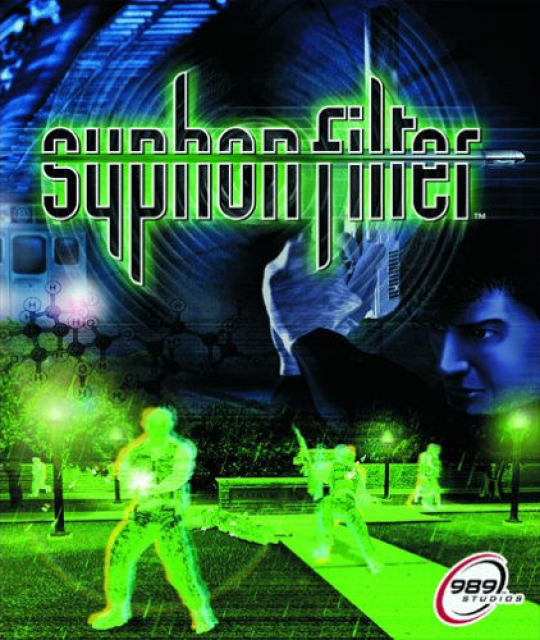