The seventh game from prolific Amiga/Atari ST developers The Bitmap Brothers, Gods is an action-platformer game in which the hero Hercules must defeat four evil guardians in order to be granted his immortality by the Greek Gods.

The game employs a variable AI that increases or decreases in severity dependent on how well the player is performing. Playing badly will cause less enemies to appear and more bonuses to be awarded, while surviving for a long time might increase enemy aggression to compensate. Hercules can collect treasure and use it to buy useful power-up items from vendors accessible at the end of every area. Many enemies constantly respawn, so the player is recommended to move quickly through the maze-like stages, though some strategy is required due to the number of key puzzles to solve.

Gods is scored by synth musician John Foxx, and the striking box art illustration (as seen on European versions of the game) was created by English comic book artist Simon Bisley.

When the SNES version was released Electronic Gaming Monthly gave the scores of 7,7,5,6 saying, "...faithful to the original and even better as a SNES cart. The strategy aspect is a definite plus especially with the hidden rooms and intricate puzzles. The pseudo artificial intelligence for the skill level is cool and works quite well". 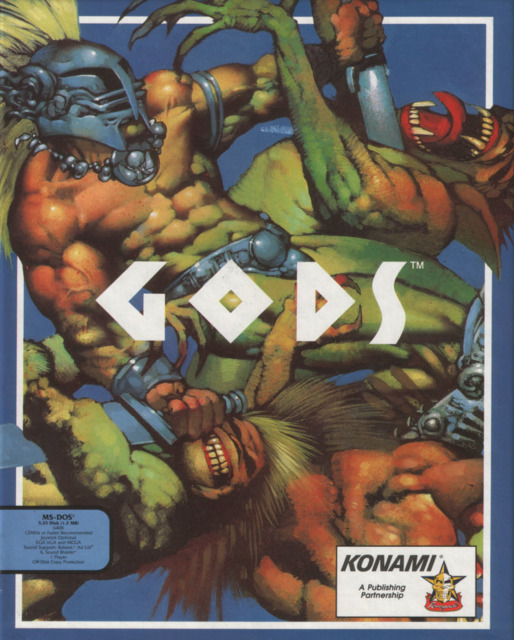