In Animal Crossing, the player lives a virtual life where they design interiors, collect items, capture various species of bugs and fish, and explore a one-of-a-kind town filled with amiable animal townsfolk.

Animal Crossing (known in Japan as Doubutsu no Mori +) is a 3D top-down life-simulation game developed by Nintendo EAD and published by Nintendo for the GameCube in Japan on December 14, 2001, in North America on September 16, 2002, and in Europe on September 24, 2004.

An enhanced port of the Nintendo 64 game Doubutsu no Mori (and the first in the series to be released worldwide), Animal Crossing adds a variety of new gameplay elements and improvements, including customizable clothing (with the new Able Sisters shop), a persistent real-time clock (using the GameCube hardware's internal clock), and support for Game Boy Advance connectivity (adding new features, such as using the e-Reader peripheral to scan real-life cards containing in-game items and designs). The game's original release included a special edition 59-block memory card, as the game's save data takes up 57 blocks.

As the Japanese version of the game was released shortly after the previous game, Nintendo offered a "data moving service" that allowed save data transfers for a short time. The Japanese version also received an updated re-release on June 27, 2003, titled Doubutsu no Mori e+, which included some localization changes from the overseas version, new villager interactions, and some additional features (including support for both the "SD Card Adapter" and the "Card eReader +" peripherals, the latter being released in-tandem with the game).

The game begins with the player's character riding a train into town, where they hope to start a new life. Upon arriving in town, the player is saved from living on the streets with a little help from the local shop keep, Tom Nook. Taking pity on the player, Tom allows them to take out a mortgage on a small house in town. After being introduced to basic gameplay mechanics by running jobs for Tom Nook, he releases the player from his employ. The game opens up at this point, allowing the player to do as they please, be that paying off their debt or just fishing the days away.

Players can search the village for items and tools, interact with their town's residents, interact with special characters who pass through town, all the while paying of their debt to Tom Nook. After the players initial debt is payed off, they can have Tom Nook renovate their home, for a hefty fee of course. The player's manor can eventually reach an epic size, consisting of a basement, main floor, and upstairs area. Players are free to decorate theirs homes however they please, whether from decor bought from Tom Nook, or with items received from neighbors and special passerby. Up to four players may have a character living in the town at one time, but only one character may be played at a time.

Animal Crossing allows the player an enormous amount of customization options. The player has the option to create new umbrellas, shirts and a matching hat, and wallpaper patterns for your house or avatar. The player's house can be customized to the unique tastes of the player by adding unique furniture pieces, different carpets and wallpapers, and a personalized greeting recited by the player's mail robot whenever another player visits. The size of the house can be expanded by paying off your mortgage to Tom Nook.

The design and layout of the player's house is rated by an organization known as the Happy Room Academy. Higher scores from the HRA can be achieved by using matching furniture and carpet, with high scores can lead to special furniture rewards.

Player customization is not limited to his or her appearance and their house. During conversation some villagers may ask the player for a new catch phrase which they will then use when addressing the player. The official town song can also be altered at the user's discretion.

Special Characters are found throughout the Animal Crossing gameplay experience. Certain characters will appear on special dated events (i.e. Tortimer), or appear regularly in ever town (i.e. Cooper). Some characters only show up when activating certain features (Kapp'n) or may appear after a certain time frame (Wisp). Whichever the case, each character have specific tasks to fill and their presence may be enjoyed by player throughout Animal Crossing.

Upon exploring their village, players will notice that it is inhabited with anthropomorphic villagers. There are many ways to interact with these friendly critters, such as chatting them up in order to discover new game information, receive odd jobs, or just to learn about a neighbor's unique personality. Upon asking about any outstanding tasks, players can make a delivery, pick up an item the villager left at another person's house, catching a fish, or simply sending them a letter to further your friendship with them. The animals understand the letters you send them, and positive words that are related to the game are the key to keeping the animal's happy. Including a gift with your letters goes a long way towards this goal.

By popping their memory card into a friend's system, players can travel from their town to their friend's. While there, the player can socialize with the different town's people, sample exotic fruits that can be taken back home and planted in their own soil, and view unique fashions created by your friend. After visiting another village, residents from the player's town may move to their friend's village and allow new residents to take their place.

One of the major quests in the game involves the player's ability to collect certain species of fish, insects, and buried prehistoric fossils. All of these items can be donated to the local museum in your name, or sold to Tom Nook for a profit. Bugs are caught by using a net, fish with a fishing rod, and fossils are dug from the ground with a shovel. After catching every species of fish or insect one time, the player will receive a golden version of the specified tool (a golden net for catching all insects and a golden rod for catching all fish).

Time passes in the game in real time by using the GameCube's internal clock. This give the game the ability to feature holidays such as Christmas, New Years, and Thanksgiving in real time. Each holiday contains holiday specific events such as fireworks on the Fourth of July and a Santa Claus-like character who delivers presents on Christmas. There are also special ingame events that take place at specific times and on specific dates. For example, an enormous fishing tournament sweeps through town in July, and every Saturday night there is a musical performance outside the train station, put on by a local musician named KK Slider.

Players may come across special items for their home resembling Nintendo games on top of either the Nintendo Entertainment System (AC and DnMe+ versions) or Family Computer (DnM+ version). These games can be played in their entirety as minigames, with most also accessible for the Game Boy Advance using the "Advance Play" feature.

All seven games from Doubutsu no Mori can be carried over through the time-limited "data moving service". In addition, players can receive Ice Climber through this service.

Most games can be obtained through either Tom Nook's lottery, Crazy Redd's, or Animal Island (the latter requiring Game Boy Advance connectivity). Some were distributed as secret codes, and some required a unique code generated (through a now-defunct website) for the player's specific character and town names.

In the international and e+ versions of the game, the methods to unlocking all NES games changed.

Eight games are obtainable through normal gameplay (such as treasure hunts, Tom Nook's lottery, or Crazy Redd's) and require no peripheral or generated code. They can, however, be unlocked using their own secret codes. These games are:

Two games normally require access to the Island, requiring Game Boy Advance connectivity. They can, however, be unlocked using their own secret codes. These games are:

Five games were only obtainable as part of giveaways on the official website and each require access to a unique code generated for the player's specific character and town names. As the website is no longer active, they are now only unlocked through unofficial third-party code generators and their own secret codes. These games are:

Two games required access to the e-Reader peripheral and their unique E-card, again requiring Game Boy Advance connectivity. These games have no secret code associated to them, cannot be obtainable in the European version without a cheating device, and were removed in the e+ version. These games are:

Two games were never obtainable without use of a cheating device and were removed in the e+ version. These games are: 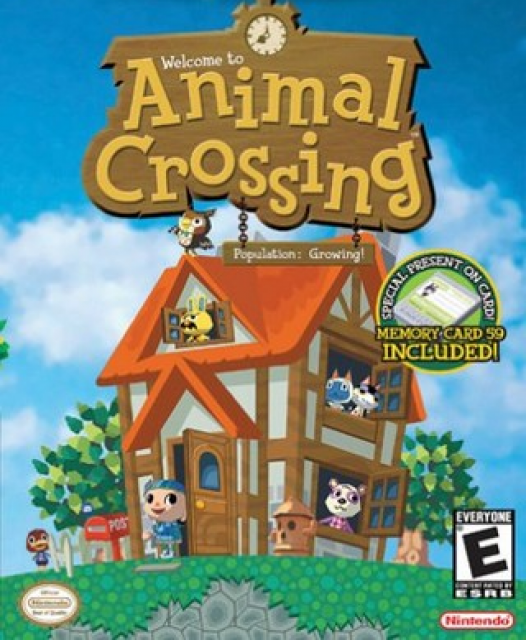