Set in the EverQuest universe, Champions of Norrath is an Action RPG in which the player is the hero that will kill lots of enemies through the land of Norrath and master weapons and spells in order to conquer evil.
PlayStation 2

Champions of Norrath is a classic style dungeon crawler point and click Action RPG, developed by Snowblind Studios released for the PlayStation 2 in 2004. Set in the Everquest universe, you get to pick from a host of familiar fantasy-type classes; such as cleric, barbarian, wizard, etc. The game has a deeply rooted co-op aspect to it; fully utilizing the PlayStation 2's multitap to allow up to four players in a local multiplayer co-op campaign. It was also one of the few games to use the PS2’s Network Adapter in order to connect other players through Sony's Online Entertainment platform.

Unlike previous games in the style and EverQuest name, Champions of Norrath was designed around the use of a controller. Attacks and movements are assigned to certain buttons, while the use of abilities and spells to the Square and Triangle buttons. Abilities unlocked in the game are available from a Hotkey menu, both in the menus, as well as from a selectable wheel. The camera is set isometrically, and when you're playing single-player or your teammates die, you can move the camera positionally to your preferences.

Equipment is acquired as loot dropped from enemies or chests, as well as bought from stores. The equipment appears differently on a class to class basis when worn, lending a unique look to each archetype. Weapons are available in a variety of different types, from small implements like daggers to war hammers. Armor comes in several weights that allow only certain classes from using particular sets of armor. Each weapon or piece of armor has 4 available upgrade slots to it, often already having at least one of these slots filled up. You can use special items obtained as loot to give stat increases to the item or to you. Some increases could include added fire damage, increased attack speed, or any number of different attributes increases.

The menus are controlled through a series of cursor-controlled menus. These include quests, inventory, as well as character information and traits. The aforementioned inventory system is governed by how much weight you can hold. This is increased by your maximum strength and/or skills you may have. Each item's weight can be viewed by hovering the cursor over the item, to better maintain your inventory. Each of the five classes has a different skill tree. It works on a tiered system, so by obtaining certain skills, it will unlock more powerful ones down the line. It starts out with the ability to simply increase damage for basic attacks or certain weapon types, but later on, you can summon skeletons, in the Shadow Knight's case, or perform deadly tornado spins as the barbarian with a flame-enhanced hammer.

There are 5 different classes in the game, each is governed by a unique race as well. These classes are:

These are your tanks. They can take damage, deal damage, and get tons of health. These are good all-around characters.

These are your archers. They use bows primarily, have decent ranged magic attacks, and are tough to play, because it can be tempting to run up and start meleeing everything. Suggested to be used in co-op play so you can effectively stay away from enemy units. Also one of the more customizable classes to suit any players preferred skill/weapon set.

These are your healers. They can also buff you and your allies fairly effectively. While they're very much a support class, they have a high enough defense to hold their own in combat.

These are your mages. Their attack value by itself is poor, but they have more than enough energy to continually cast magic spells. However, without the ability to hold shields, they can go down pretty fast.

These are a unique class in that they are a blend between magic and melee. They are similar to rogues in that they are limited to lighter type armor and weapons. However, they have plenty of poisonous damage spells to make up for this, as well as some pretty fast attack speeds.

By selecting this mode, the player was able to choose from any of their pre-saved characters from the single player game, and take them questing online with up to three other players from around the globe. It wasn't an entirely new concept at the time, but definitely enjoyable. The ability to join a game session in progress, at any point, or create a new game to begin with, was also a nice feature appearing in the online portion of the game. It also supported the PS2 headset, being one of the few games that did. Players' character names, as in the single player, were located on the tops of the life bars, in the color of the circles denoted to the respective characters, a basic way of telling who's who. Weapons and armor could also be traded to fellow players online via the same system used in the single player mode. 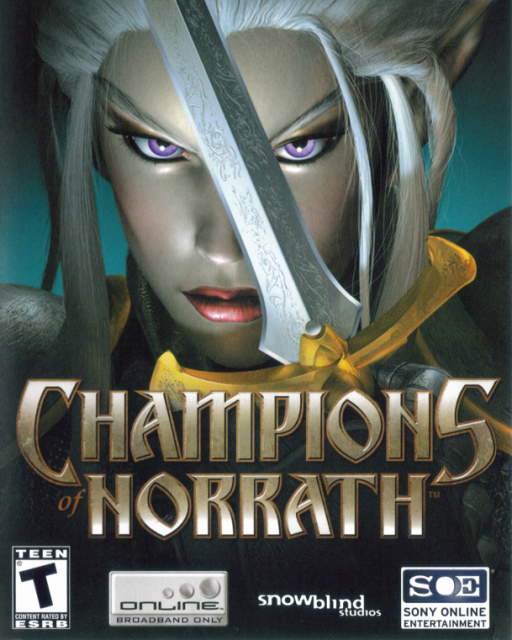