Cannon Ball is a early Hudson game where players destroy large spheres with a harpoon.

Cannon Ball (Bubble Buster on the ZX Spectrum) is a game available for various Japanese and European computer formats, released first in 1983. The game stars a character known only as Cannon Man, who pitches a harpoon upward to pierce and destroy bouncing spheres. The much later Pang/Buster Bros. series from Mitchell Corporation is very similar to Cannon Ball, and is thought to have been inspired by it. 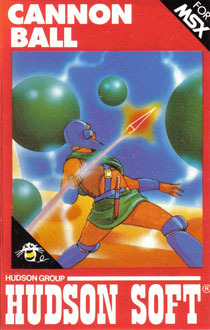