Alone in the Dark: The New Nightmare

Alone in the Dark: The New Nightmare is a survival horror game developed by Darkworks studios and published by Infogrames. The game takes place on 'Shadow Island', and features two main protagonists: Aline Cedrac and Edward Carnby.
PlayStation 2

New Nightmare is the fourth game in the Alone in the Dark series, though it has little connection to the original beyond the lead character of Edward Carnby and themes of supernatural monsters. Its setting was also updated to reflect a more modern period. Much of the gameplay design still remains in tact, however, with a mix of puzzle solving and combat performed within a series of fixed camera angles.

Each protagonist's gameplay differs in terms of the amount of action and puzzle related gameplay that the player will face with Carnby being the more action-orientated portion of the game and Aline's being more puzzle-orientated. Though the player can chose between either protagonist the stories of each of the characters both occur at the same time and interwoven together. Though there is no major difference in terms of how each character is controlled.

A thirty-three year old private eye, Edward Carnby travelled to Shadow Island to discover what exactly happened to his best friend, Charles Fiske, when Fiske was found dead on Shadow Island. As Carnby becomes more involved with the events taking place on Shadow Island, he becomes less interested in his initial goals and concentrates on finding a way off the island and to ensure Aline's safety.

A 27 year old Ethnology Professor at Boston University, Aline Cedrac travelled to Shadow Island to help Professor Obed Morton decipher Abkannis writing tablets as well as to search for the identity of her father.

The last Abkannis witchdoctor, Edenshaw came to Shadow Island many years ago and has lived with the Morton family ever since. Edenshaw has watched over the Morton family for many years and has made it his mission to ensure that the gate to the World of Darkness is never opened. Edenshaw acts as an assistant to the player and will appear every now and again to reveal information that may or may not be necessary to the player. He plays a major role towards the end of the game.

Initially Edward assisted his brother in attempting to open the gate to the World of Darkness and made deals with Christopher Lamb in order to gain 'supplies' that he required in order to make further progress. Edward was revered by many for his work on the Abkannis tribe, though they were unaware of his methods of discovery. After a period of time, Edward realised just how terrible the things he was doing were and turned against his brother, Adam, refusing to assist him.

Charles Fiske, Edward Carnby's partner and best friend has been reported dead off the coast of Shadow Island. Carnby decides to investigate his best friend's death which leads him to meet with Frederick Johnson, Johnson informs Carnby of three ancient stone tablets that Fiske was searching for. The tablets are believed to unlock some form of incredibly dangerous power.

Johnson requests that Carnby should take up Fiske's investigation and to search for the tablets. Carnby accepts that it is his personal priority however, is to find whoever killed Fiske. Johnson introduces Carnby to Aline Cedrac, a young and intelligent university professor. Aline accompanies Carnby to Shadow Island to help recover the tablets as well as to assist Professor Obed Morton, who she believes is her long-lost father. As their plane nears the coast of Shadow Island, it comes under attack by a creature of the island, which forces them to parachute out of the plane. They are separated, Aline landing atop the roof of a mansion and Carnby landing in some woods nearby.

Alone In The Dark: The New Nightmare was ported to the Game Boy Color by Pocket Studios and was first released in Europe alongside its console counterparts on May 18, 2001. The port was later released in America on June 25, 2001.

In 2005, a film adaptation directed by the infamous Uwe Boll was released based on the video game series. The movie was supposed to be a direct sequel to the fourth game in the series, Alone in the Dark: The New Nightmare, although the movie has little-to-no relation to the original trilogy of games from the 1990s. The movie contains plot elements that directly contradict those in The New Nightmare, thus it is not considered canonical. The movie was named the "Lowest-Grossing Game Based Movie" in the Guinness World Records: Gamer's Edition 2008 edition.

AitD: The New Nightmare can be purchased at GOG, Steam, GamersGate, and Humble Bundle. 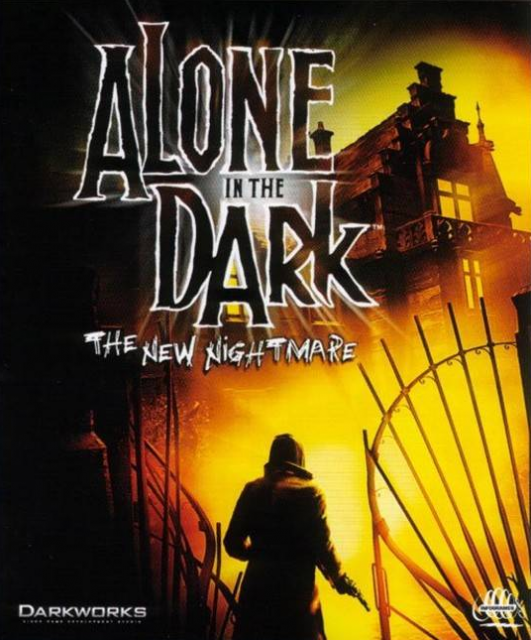