Pac-Attack is a Pac-Man spin-off, in the same vein as Tetris and/or Dr Mario. It is based somewhat on Namco's earlier game Cosmo Gang: The Puzzle, an Arcade and Super Famicom game released the previous year.

The object of the game is to clear rows of blocks by getting them into straight lines; however, most of the falling puzzle pieces also have ghosts attached which take up valuable space where blocks could be stored. The solution to this problem is Pac-Man himself. Every once in a while a Pac-Man piece will fall, and all the ghosts on the board will turn blue. If the Pac-Man piece is situated in an area where he can easily catch any ghosts he will remove them from the grid.

The game offers a standard "Normal Mode" in which the game plays out as described above, as well as a "Puzzle" mode in which the player is given a limited number of Pac-Man to eat the various ghosts.

When the SNES version was released Electronic Gaming Monthly gave the review scores of 8,7,7,8 and 8 out of ten. Mike Weigand wrote, "No, don't laugh, just try it! This game looks like nothing but once you start playing you will not be able to stop! The three games are addictive, and the two-player competition will have you and a friend playing until you drop!". 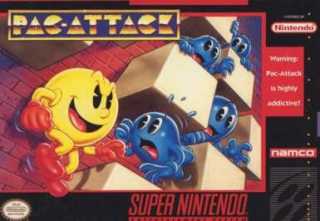