Ys Book I & II follows the adventure of Adol Christin, a traveler who embarks on a quest to locate the fabled lost floating continent called Ys. The game is a enhanced compilation of the first two Ys titles and was one of the first games to demonstrate the potential of the TurboGrafx-16's CD-ROM add-on.

Ys Book I & II is a compilation of the games Ys: Ancient Ys Vanished and Ys II: The Final Chapter, action RPGs that were originally released for the PC-88 by Nihon Falcom. Hudson Soft and Alfa System developed the collection and it was one of the first major titles released for the TurboGrafx-16's CD-ROM add-on. The game contained improved graphics over the original PC versions, a longer quest that combined the first two games, a Redbook audio soundtrack, cinematic cutscenes and extensive voice acting throughout the game. When it released in Japan on December 21, 1989, Ys Book I & II was regarded as a technical marvel that showcased the possibilities of the CD-ROM format along with other early CD-ROM RPGs like Tengai Makyou: Ziria. The title was later released in North America in 1990 courtesy of NEC.

The gameplay is fairly straightforward. There is no "attack' button. The player simply runs into the enemies to slash them with Adol's sword. The armor Adol wore, his level, and the angle at which the player attacked determines the success of the attack. Also, some enemies have a higher defense versus physical attacks and can only be defeated with certain items or magic.

Differences From Prior Releases

The music in the TG-CD release of the game is by far the biggest difference to prior releases. The graphics were updated a little and there was voice acting as well. The English release even featured performances by several well known cartoon voice actors and actresses of the time including the likes of Alan Oppenheimer, Debi Derryberry and Jim Cummings.

The game was widely acclaimed by critics upon release. In Japan, Famitsu's panel of four reviewers gave the game scores of 9, 9, 9, and 8, out of 10, adding up to an overall score of 35 out of 40. This made it one of their two highest-rated games of 1989, along with Makai Toushi Sa·Ga (The Final Fantasy Legend). It was also one of only seven games to have received a score of at least 35/40 or more from Famitsu up until 1989.

Among North American critics, it has an average aggregate score of 91% from Defunct Games based on six reviews from the early 1990s. Issue 2 (August/September 1990) of TurboPlay magazine praised the game in its review, stating that the introduction sequence is "mind-blowing," that "everything, from the graphics to the gameplay, is incredible." Issue 5 (February/March 1991) of TurboPlay later gave it a score of 9 out of 10. The November 1990 issue of VideoGames & Computer Entertainment also gave it a score of 9 out of 10, with the reviewer describing it as "one of the most detailed, involved games I have ever played," concluding that it "is the first game worthy of being put on CD. No one can ever claim that CD-ROM games are just a gimmick ever again." The December 1990 issue of GamePro gave the game a full score of 5 out 5, stating that it has "it all – great graphics, engaging RPG gameplay, and a brain-draining quest." Computer Gaming World reviewed the game in its December 1990 issue (pages 93-94), where reviewer Roe R. Adams (who worked on the Wizardry series) stated that the "hottest advance in gaming this year has been the debut of programs on CD-ROM disks from Japan" and that "Ys is the first CD-ROM available here to actually show off the new capabilities of the technology." He praised the enhanced graphics and the "spectacular"anime cutscenes. He also praised the plot, including the "suspense" and "sense of urgency" during the climax, and the gameplay, including the various mini-quests and the enemy AI that "actually pursue the player, homing in on him and attacking." His only criticism against the game was the unusual "bump-and-grind" combat system.

In the 1991 Video Game Buyer's Guide issue of Electronic Gaming Monthly, Ed Semrad gave it a rare score of 10 out of 10, stating that the "perfect game finally happened." He concluded that, combining the soundtrack with "two, not just one, full blown RPG's, each with lengthy" graphics and voiced intermissions, "you get the ultimate in this genre." The lowest score for the game at the time was 8 out of 10 from another Electronic Gaming Monthly reviewer, Steve Harris, who praised it as "an outstanding game adventure" while criticizing the game as "slow for me" but nevertheless concluding that "the quality is obvious." The panel of four Electronic Gaming Monthly reviewers gave the game scores of 10, 9, 8, and 8, adding up to 35 out of 40 overall. The magazine's 1999 Video Game Buyer's Guide issue (page 139) described the game as still "one (well, two actually) of the best RPGs around." The game was reviewed in issue 172 (August 1991) of RPG magazine Dragon in "The Role of Computers" column (page 58), where the reviewers gave the game 5 out of 5 stars. The review praised many aspects of the game, including "important characters whose voices can actually be heard," the cinematic sequences being "well done" and "extremely satisfying to watch," and the animation being "the best we've seen" in a TurboGrafx game, concluding that it is "a great adventure game that offers long play value, music, cinematic sequences, and role-playing action."

In 1990, TurboPlay magazine stated that it gets the reviewer's "vote for having the greatest sound and music track ever recorded for a video game." In Computer Gaming World (December 1990, pages 93-94), reviewer Roe R. Adams (who worked on the Wizardry series) praised the "lush" background music, and speech "heard in real voice, not digitized!" The December 1990 issue of GamePro stated that the music "to this game is definitely high budget" with "43 stunning tracks." In Electronic Gaming Monthly, Ed Semrad praised it for having "a true CD soundtrack" and "spoken intermissions" with "perfect" voice acting, while Steve Harris praised it for having "the most amazing sound track that explodes from the CD like a major motion picture." Electronic Gaming Monthly gave the game awards for Best BGM and Best Sound. In the August 1991 issue of Dragon (page 58), Roe R. Adams praised how the "voices can actually be heard" as well as the music.

In 1990, Ys I & II received the Game of the Year award from OMNI Magazine, as well as many other prizes.Electronic Gaming Monthly, in its 1991 Video Game Buyer's Guide issue, gave it awards for Best RPG Video Game, Best Game of the Year (TurboGrafx‑16), Best BGM, and Best Sound.

The game has been well received in retrospective reviews. RPGFan reviewed the game in 2001 and gave it a 92% score. It described it as "the first RPG on the first video game console CD-ROM" and stated that its "release heralded the evolution of the standard role-playing game," promising "a much larger, more colorful world, populated with lifelike characters who communicated with voice instead of text." It praised various aspects of the game, including the responsive controls, the graphics as having "stood the test of time," the soundtrack as an "audio masterpiece" (giving the sound a 100% score), the "vocal performances" and "dubbing" as surpassing "most gaming dubs produced today," the "fantastical world," and the "story of tragedy, hope and life." IGN reviewed the Wii's Virtual Console release of the TurboGrafx-16 game in 2008 and gave it a score of 8.5 out of 10. The reviewer Lucas M. Thomas described the "incredibly simplistic gameplay design choice" of "ramming" into enemies as "interestingly addictive" and found that it "streamlines the entire experience, which benefits the progression of the game's plot." He also praised the soundtrack as "one of the best to be heard" on the Virtual Console and concluded that it is "hard to argue against the value of getting two games' worth of content combined together into one double-length adventure."

Electronic Gaming Monthly listed it among the best games of all time, ranking it at number 38 in their 1997 list, and later at number 153 in their 2006 list with 1UP. GameSpot also included it in their list of the greatest games of all time. The game also received the number 100 spot on IGN's "Top 100 RPGs of All Time" feature in 2012.

Ys Eternal, an enhanced remake of Ys I & II, was released in Japan for the PC platform's Windows operating system in 1997. It featured updated graphics and complete animation sequences, compared to the animated stills of the original. This remake was well received, with RPGFan awarding it a perfect score of 100%, including 100% in all the categories of gameplay, graphics, story, control and sound/music. The reviewer Travis Lallman stated that "Ys Eternal, as well as the Ys series, in general, are the best RPG's ever made." He said the "Ys series completely destroys the competition," including the Final Fantasy series, concluding that "Ys is the best game ever made."

Another update, Ys I & II Complete, was released in Japan for Windows PC on June 28, 2001. It contained updated graphics and FMV sequences. 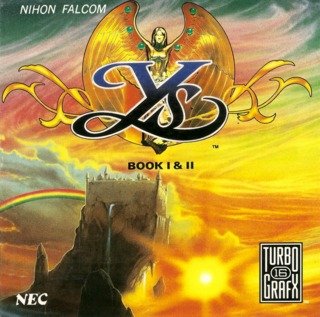