The evil Dr. Wily is back with eight new menacing creations, and it's up to Mega Man to foil his new plans for world domination! Known for bootstrapping the long-running series, the game also introduces passwords, helpful items (such as Energy Tanks), and the series standard of eight bosses.

Mega Man 2 (known in-game as Mega Man II, not to be confused with the Game Boy game Mega Man II known in Japan as Rockman 2: Dr. Wily no Nazo, which loosely translates to "Rockman 2: The Mystery of Dr. Wily") is a side-scrolling action platformer developed and published by Capcom for the Nintendo Entertainment System on December 24, 1988 (in Japan), July 11, 1989 (in North America), and January 1991 (in Europe).

The second installment of the original Mega Man series (and the sequel to Mega Man), Mega Man 2 expands on the series by adding a new item (the Energy Tank, which allows Mega Man to refill his health at any time), unlockable tools for transportation (including levitating platforms and jet-propelled sleds), the "eight boss" standard (compared with the original game's six bosses), and a new password system (removing the scoring system in the process). The game is known for bootstrapping the franchise (as the team decided to make it in their spare time, because of the lack-luster sales of the original).

Set in the year 20XX, the game takes place a year after the events of Mega Man, in which the humanoid robot hero Mega Man defeats the evil Dr. Wily and his robotic henchmen. When Dr. Wily creates eight new combat robots specifically to challenge Mega Man, it's up to Mega Man himself to foil Dr. Wily's second attempt at conquering the world.

Mega Man 2 saw a number of gameplay improvements over the original. Some of them are directly tied to Mega Man himself including tighter controls, a lessened damage knockback, the ability to stand on spikes during hit invulnerability, and decreased inertia during falls. Mega Man 2 is also the first game where water affects Mega Man's jump. Another introduction in Mega Man 2 is that of Energy Tanks, which completely refill Mega Man's energy and can be found in certain stages throughout the game. Mega Man can hold up to four of them at a time. A password feature was also introduced for the first time in Mega Man 2. The US release also has two selectable difficulties; the "Difficult" option was the default setting for the Japanese version. Difficult increases enemies' durability, amongst other minor differences.

The Item devices built by Dr. Light are another new feature built off the idea of the Magnet Beam from the first game. The three Items have increased functionality including wall-scaling, air platforms, and a rocket sled that would eventually become Mega Man 3's Rush Jet. Many of these items can make certain difficult parts of the game easier, such as being able to completely skip the disappearing block section in Heat Man's stage with the Item-2 rocket sled. As a result, players were allowed more semblance of strategy to their stage choices depending on their play styles.

The larger number of Robot Master weapons Mega Man can acquire also have greater usefulness compared to the first game -- most weapons have some kind of use outside of direct offense. The Bubble Lead runs across the ground and can detect pitfalls; the Leaf Shield can indefinitely protect against small enemies such as birds; the Time Stopper can freeze the deadly beams in Quick Man's stage; and the Crash Bombs can destroy certain wall types. That's to say nothing of the value of the Metal Blades, which can be thrown in eight directions from a nearly limitless stock.

Metal Man's stage consists of a myriad of metallic menaces in the form of conveyor belts that can either hinder Mega Man's speed or hasten him into a pit; dangerous toothed grinders whose chains are even dangerous to the touch; saw blades that can suddenly bore out of the ground; and clown robots that balance atop rolling gears.

Metal Man himself uses a conveyor belt in his boss room that he can change directions at will. He will stand on one side and throw three Metal Blades at a time. It should be noted he seems to be much less adept at using them than even Mega Man. He is weak against the Quick Boomerang (and later on, his own Metal Blade).

Air Man's sky fortress is fittingly set amongst the clouds over a bottomless abyss, so precise jumping is a key prerequisite for success. A series of horned faces called Air Tikkis act as both platforms and dispensers of smaller versions of themselves throughout the stage, along with a sequence where Mega Man must progressively claim a series of cloud platforms from their lightning-chucking owners.

Once Mega Man reaches the master of air, his Air Shooter blows forth one of a few patterns of miniature tornadoes whose force will push Mega Man back against the wall. Air Man will change sides after a couple rounds of air shooting. He is weak against the Leaf Shield.

Bubble Man's waterfall paradise quickly goes to hell amid a dive underwater infested with frogs, huge lantern fish that spew shrimp, jellyfish, and crabs. The bigger danger, however, is the spikes lined on the watery ceiling that require Mega Man to make some pretty accurate jumps in cramped spaces.

Bubble Man is able to attack with an arm cannon along with his bouncing Bubble Lead, and like the stage, his own room contains ceiling spikes. However, they should not be a danger considering he is weak against the ever-versatile Metal Blades.

Quick Man must have spent his entire budget on the couple instances of his infamous instant-death laser traps, as the other parts of the stage are sparsely challenging despite the occurrence of some flame-throwing fireheads that appear nowhere else. The Time Stopper will work wonders against the lasers for those who don't wish to test their reflexes.

Mr. Speedy can fire his Quick Boomerangs somewhat unpredictably, but the real danger is the rate at which he zips around the screen and becomes nigh-unavoidable. If the player hasn't used the Time Stopper to get past his defenses, a full charge of it can knock off half his life. In the time that takes to work, however, the player probably could have killed him quicker with Mega Man's arm cannon.

A spindly tower-like structure is what Crash Man calls home. Metalls camp out here along with an infinite amount of those spinning tin can dudes that spawn along a sequence of grid-patterned moving platforms that would otherwise be rote boredom. The stage climaxes in a long ladder climb made more difficult by birds that drop their egg-hatched spawn at Mega Man.

Crash Man is a superb jumper, but even better is the accuracy at which he hurls his Crash Bombs at Mega Man, forcing him to constantly be on his toes. Crash Man's jumps are his downfall, as he is weak against the ascendency of the Air Shooter.

An ice stage that isn't made of ice, the slippery surfaces of Flash Man's jeweled corridors are most notable for offering an alternate path if Mega Man can destroy certain barricades with the Crash Bombs. If he can't, however, some Sniper Joes and their giant hopping walkers will try to keep him from reaching their frail master.

Flash Man is able to halt time for a brief period with his Time Stopper. Despite this ability, he is one of the weakest Robot Masters and is vulnerable to pretty much everything. Stand in place and throw Metal Blades at him for maximum humility.

Like Fire Man from a game prior, Heat Man's stage contains a large amount of flowing lava that provides a good incentive for Mega Man to make good on his leaping. The stage's real claim to fame is the large number of disappearing blocks that span a chasm of fire and death.

The flames of Heat Man's rage, however, may incinerate Mega Man. He can chuck a few firebursts before zipping at Mega Man in an ignited state. Sense would dictate Heat Man wouldn't like being hit with the Bubble Lead and indeed, he does not.

Wood Man's forest base features a synergy of all the things the player would normally find in the woods including the first appearance of the recurring Bubble Bat enemies, carrot-firing robo-rabbits, fire-breathing dogs, monkeys that hang around and flip out, and roadrunners that totally fake Mega Man out.

Wood Man's Leaf Shield defends him from all attacks. When he throws it off of himself, leaves also fall down from the top of the screen and are difficult to avoid. When vulnerable, his weakness is the Atomic Fire -- a totally charged version of it will totally ruin Wood Man's day.

Once all the eight robots are defeated, Mega Man automatically proceeds to Dr. Wily's castle. It consists of six stages. Mega Man 2 was also the first game to feature an external map shot of Wily's castle.

The first stage takes Mega Man to the perimeter exterior of WIly's castle. It is the first instance where he is required to make use of his special Items. The boss is the Mecha Dragon, which chases after Mega Man before finally stopping to fight. An easy we to defeat the dragon is to jump on the top block and use the Quick Boomerang. If Mega Man does get hit by a fire ball, he will fall onto another block.

Now inside the castle, Stage 2 revisits some obstacles from Flash Man's and Metal Man's stages. The boss is a sentient room that breaks apart to reform robots that attack Mega Man.

Stage 3 is a dirty, watery stage that marks the first instance in the series of a spike-lined descent. The boss is the Guts Dozer, a huge tank that resembles Guts Man. The easiest way to defeat this boss is to jump on the the front end and use the Quick Boomerage on its face.

The fourth stage is perhaps the trickiest of all. The beginning features numerous pitfalls that Mega Man will have to make deft use of the Bubble Lead to avoid, while the latter part sees the return of the grid platforms from Crash Man's stage. The boss is a number of timed turrets that require the Crash Bombs both to defeat and to destroy the barricades some of them hide behind. Resource management of the Bombs is key.

Another first that appears in the fifth stage is the teleporting hatch room where Mega Man must refight all of the Robot Masters. After clearing them, Wily appears, only to retreat and cause the floor to fall out under Mega Man's feet.

The game's final stage is a silent fall followed by a leaky corridor of some kind of deadly acid. After battling a mutated Wily alien, the real Wily admits defeat to Mega Man.

Mega Man 2's music was composed by Manami Matsumae (Manami Ietel), Yoshihiro Sakaguchi (Yuukichan's Papa), and the stil-elusive Ogeretsu-Kun. It is seen as some of the best in the series. It is by far the most remixed Mega Man game on sites such as OverClocked Remix, and a vocal rendition of Dr. Wily's castle theme was a Japanese internet meme called Okkusenman.

In Japan, the soundtrack was released on CD as part of a box set that included the soundtracks to Mega Man 1-6. It shares its disc with the first Mega Man. 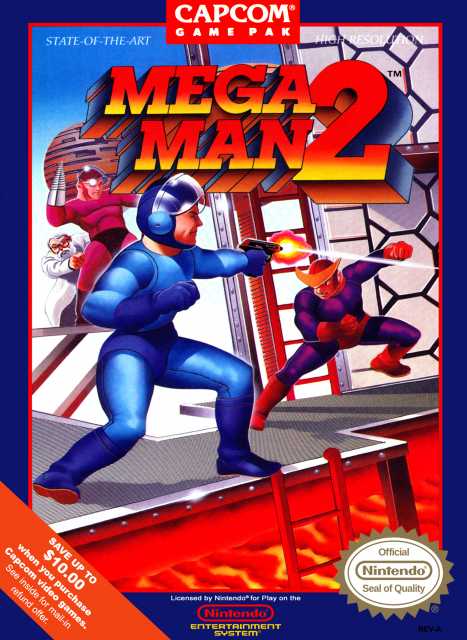