Play tennis as your favorite Mario franchise characters, in the first game released for the Virtual boy.

Mario's Tennis was released on August 14th, 1995 and was the North American pack-in game that came along with the Virtual Boy game system when you bought it. Making it the first game released for the system.

Because of the game being a pack-in title, it did not come in a normal Virtual Boy box. Instead the Virtual Boy Mario Tennis cartridge just came with the system loose, along with an instruction manual and black "protector" case that covers the part of the cart that slides into the system. In Japan you could buy the game separately with it's own box since the game wasn't a pack-in game in Japan.

Mario's Tennis uses the 3D effects of the Virtual Boy by having the player hit the Tennis Ball with their racket to the other side of the court. The ball thusly looks like it is heading towards you or away from you in a simulated 3D effect. The game contains 7 characters from the Mario universe that you can play as: Mario, Luigi, Yoshi, Toad, Princess Toadstool/Peach, Donkey Kong Jr., and Koopa Troopa.

Although Mario Sports games had existed since the NES era with Nintendo's own Tennis and Golf games on NES (complete with Mario as the referee); the groundwork for the modern version of Mario Sports games was given it's birth with the Virtual Boy's Mario's Tennis. It was the first Nintendo Mario Sports game that included the 8 playable Mario universe characters. A tradition that was brought over from the SNES classic and mega-hit kart-racing game, Super Mario Kart. Which had the same 8 playable characters as that game's cast.

Mario's Tennis is arguably the most popular, well known and easily found Virtual Boy game, due to the nature of the game being the pack-in title for the system in North America.

There has never been a tennis game like Mario's Tennis. Mario, Yoshi and the whole cast of your favorite characters move freely around a completely three-dimensional tennis court. If you move to the net, and your opponent lobs, the ball seems to actually fly over your head. There has never been a game that was able to realistically create the feeling of depth on the court. You'll find yourself trying to turn around and check the line when your opponent slams a passing shot down the line. It's time to prove that you can serve, volley and rally with the best of them!

He's an average player whose court speed and leg strength are solid. His racquet contact area is average, and he relies on his skillful groundstrokes, though he will approach the net occasionally.

His skill level and court strategy are similar to Mario's. He has better court coverage, though, due to being faster than Mario.

The Princess is slow, but her racquet contact area is large. She doesn't' like to approach the net, preferring to instead rally from the baseline.

He is the fastest of all the players, but his racquet contact area is small. He plays an aggressive type of game by rushing the net at every opportunity.

Toad is quite quick on the court, but his racquet contact area is not very large. Like Yoshi, he tries to approach the net often. Though he is no strong, he has great court coverage because he can lunge at tough balls.

Being a turtle, basically, his court speed suffers. he has a large racquet contact area though. He likes to rally from the baseline, and he also can lunge at tough shots like Toad.

He is slower than all the other players, and also has a smaller racquet contact area. He is however, understandably the most powerful of all the players. His strong groundstorkes allow him to win many points from the baseline.

A Button - Hit the Ball (Solid Shot), Toss the Ball, Register a selection, Move to next point.

Select Button - Press when game is Paused to access the adjustment screen.

Start Button - Pause the game, advance to the next screen.

Use the Left Control Pad and your player moves forward, back, left and right.

1. Move the player to the left or right.

2. Press either the A or B Button to toss the ball.

3. Press the A or B Button again to serve. If you time your swing correctly, the serve will be good. The A Button hits a Hard Serve, and the B Button hits a Soft Serve.

Press the A Button to hit normal, strong groundstrokes. If the ball is above your head, you will automatically do an overhead smash. When near the net, you automatically volley. Press the B Button to Lob.

* UP on the Left Control Pad = Long Backcourt Shot

* DOWN on the Left Control Pad = Short Frontcourt Shot

* LEFT or RIGHT on the Left Control Pad = Shot Toward Sideline

Speed Up Between Points

Press the A Button between points to speed up the action. Your character will run to the service line, and point information will not be displayed on screen as long.

Press the Start Button at any time to Pause game play. While the game is paused, you can adjust the Virtual Boy IPD and focus. If you want to make adjustments, press the Select Button (while paused) to access the IPD and focus screen. After making adjustments, Press Start to return to the pause screen. Press start again to go back to game play. Note: You cannot access the Auto Pause On/Off selection by pausing the game.

If you press Start, Select, the A, B, L and R Buttons simultaneously, the game will reset (this is called a "Soft Reset")

When battery power is low, you will see a flashing battery indicator in the corner of the screen. Please change the batteries as soon as possible after the indicator appears.

There are two modes of play in Mario's Tennis. At the Title Screen, you can select between Singles or Doubles with the Left Control Pad, then register your selection with the A Button.

Make the selections as indicated for Singles play. Next select your player character, your partner and your two opponents.

When playing Tournament, you'll see the bracket screen that shows the player matchups and your opponent is randomly selected. During the tournament, the outcome of matches other than your own is decided by the computer. Enter the tournament by pressing the A Button.

Court - Notice that the net is decorated with hearts. The court is used for both Singles and Doubles mode.

Lakitu - Lakitu is the Chair Umpire (High and above the court) and score keeper for all of the matches. There is no complaining about line calls allowed with this judge! Mario fans will remember Lakitu as the Koopa Troopa with glasses floating in a cloud who drops Spiney enemies on our heroes.

Your Player Character - Your player always appears at the bottom of the screen. Watch the facial expressions of the different characters!

Except for Tournament matches, the Results Screen shown below is displayed at the end of every match. This screen gives you the chance to see how well you played in the match by displaying various statistics. Press the A Button to return to the title screen.

Study the following chart, so that you will select a difficulty level that is appropriate for you.

Player's Body Can Obscure Ball No No Yes

* Note that the ball won't hit the player character's body.

Mario's Tennis School (How to Play)

When serving, check your opponents location on the court. use this to select the placement and depth of your serve. For the easiest serve, use the B Button without the Left Control Pad.

Watch where the opponent stands during service, and try to effectively place a solid return of serve. If an opponent rushes the net just after serving, make sure that you use your lob.

Timing is very important on these shots. If you press the Left Control Pad too early, your player character will move and you may miss the shot. The placement of your shots can be affected by the timing of your swing of the racket. If you swing early or late it can change where your shot goes. For example, if you press the Left Control Pad and swing early while trying to hit a ball to the left, the ball will fly more sharply to the left. Being able to correctly time the swing of your racquet can directly affect your success on the court.

When playing Doubles, do not stand directly behind or in front of your partner. In Doubles, maximum court coverage requires you and your partner to cover the sidelines effectively.

The basic unit of scoring is the point. Points start from 0 (Love) and the first point scored is called 15. The second point is called 30. The third point is called 40. And the fourth point won wins the game. If the game reaches 40-40, it is called Deuce. The next point won gives that player the Advantage. If that players wins the next point, they win the game. If they lose the point, the score returns to Deuce, and play continues until one side with the Advantage wins a point.

A game is normally the first to win four points. Unless the match goes to Deuce. The first player to win six games wins a "Set" though the winner must beat the opponent by at least two games. If each side wins six games, there is a special game played called a Tie Break to determine who wins the set.

As mentioned, a Tie Break is played when the score is 6-6. In the Tie Break, the first person to win seven points, and win by two points, takes the set. The score for the set is recorded as 7-6.

Out - If your shot lands outside the court, you lose that point. A sign appears telling you when a shot is out.

Fault - If your serve does not land in the service area, you "fault". If you fault twice in a row, it is called a "double fault," and you lose the point. During the game "Fault" and "Double Fault" will be indicated. The service area is the square that is near the net, and in front of where you opponent is standing prior to serve.

Serve - The server stands behind the baseline outside the court, tosses the ball and then hits it into the service are on the other side of the court. The service area is the square in the frontcourt ahead of your opponent. A serve must bounce before it is returned. Service lasts for one game, and it alternates between players.

Groundstrokes - Hit the ball back to your opponent after it has bounced once.

Volley - While close to the net, hit the ball before it bounces.

Lob - Hit the ball over the head of an opponent who is at the net.

"Try to use the shots and information detailed above to your full advantage. Learning the terminology and rules will get you into the great game of tennis. Now it's time to hit the court!" - Mario 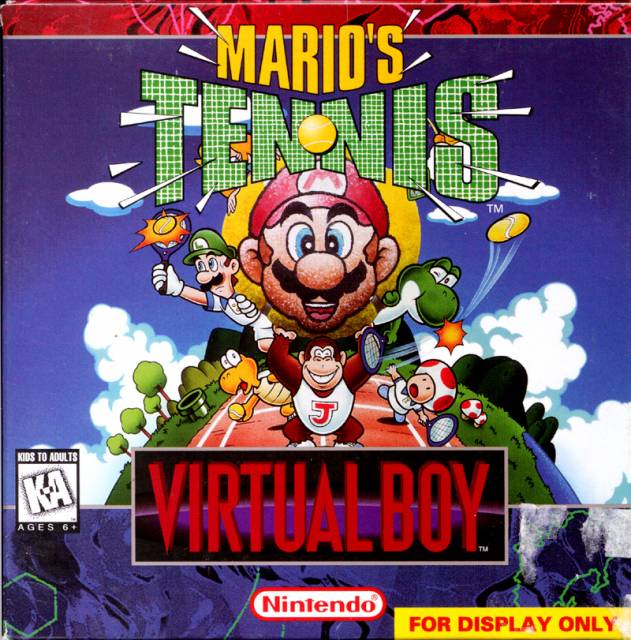