Wetrix is a 3D falling blocks puzzle game, the object of which is to change the landscape of a grid in order to prevent water from spilling out.

The Board and Game Pieces

A game of Wetrix is played on a flat, square 3D platform that occupies the majority of the screen. The player can use various game pieces to raise and lower the landscape to contain and control water on the board. The game pieces are as follows:

Red, upwards facing arrows that raise the landscape by one level. They come in four standard shapes: a straight line, a T shape, an L shape and a square ring. These are one of, if not the most common piece in the game; and in most game modes, several of these will fall initially to let the player build a perimeter before any water or other pieces fall.

Green, downwards facing arrows that lower the landscape. They come in two standard shapes: a small square and a straight line. No matter how high the downer connects with land, it will lower the land to the lowest point that any part of the downer touches. As such, if a downer is placed on a completely flat surface, it will have no effect.

Bubbles of water that break open upon contact with any piece of land. They come in various sizes. When water spills out of the bubbles, it behaves like water, flowing across the ground and attempting to fill the shape of its container. If water leaks over the edge of the board, blue arrows will flash to indicate where the spillage is occurring.

Balls of fire that evaporate water, thaw ice and destroy land. They exist in only one form. When fireballs hit a body of water, they will continue moving to the ground, evaporating the water as they go. Depending on the land surrounding and underneath the water, some water may still remain. If a fireball hits dry land, it will explode, clearing the point of contact to the ground and creating a sloped crater around it. Fireballs will also thaw ice, though a second fireball will be needed to evaporate the water.

Bombs, though not of the giant variety, that blow holes in the landscape. They exist in only one form. When a bomb hits land, no matter how high, it destroys the point of contact, leaving a hole in the land where it landed and slightly deformed terrain in the immediate surroundings. The hole can be expanded by downers and repaired by uppers. If a bomb is placed in an existing bomb hole, a re-bomb is triggered: three additional bombs are dropped on the field at random. If one of these bombs land in an existing bomb hole, another re-bomb is triggered.

Lakes and The Drain

On the right side of the screen is the Drain Meter, which represents how much water has flown off of the board. When the drain is nearly full, it will begin blinking to notify the player. When the drain fills completely, the game is over. The player can evaporate lakes to reduce the drain meter

As games progress, a timer in the upper-right corner of the screen will run. After a few minutes, a chime will play a couple of times and the game's level will increase. With each level increased the background and land change their colours and the speed at which pieces drop increases. The highest level in any game is level 10.

If the player has at least five lakes on the game board when a level up occurs in certain game modes, they will be rewarded with a smart bomb. When activated, a smart bomb resets the game board to a flat, empty state, empties the Drain Meter and Earthquake meter, and queues several uppers in the piece queue, similar to the beginning of the game. The score, level timer and current level are not reset, though, allowing the player to come back from a potential game over.

From level 2 onwards (excluding levels 4 and 8), ice cubes will periodically fall onto the largest body of water on the board. If the cube hits a body of water, it will freeze over. After a length of time, the ice will thaw and the water will flow freely again. If the ice hits dry land, however, the player will receive bonus points. The player can also use fireballs to thaw the ice instantly.

On levels 4, 8, 9 and 10, multiple mines will periodically fall into a single body of water. The mines float in the water for a short amount of time and are predominately harmless. They can be split up into separate lakes and forced onto dry ground without risk. However if the player evaporates a lake with mines in it, the mines will explode, stopping the evaporation and leaving holes akin to those made by bombs where the mines were.

More often than not, the objective in a game of Wetrix is to score as many points as possible. Points can be gained from dropping game pieces onto the board before they land on their own, letting ice land on dry land, repairing holes in the landscape and thawing ice. The main method of gaining points, however, is evaporating lakes.

All scores in a game of Wetrix are calculated based on how well the player is doing in the current game. Base scores are initially multiplied by the number of lakes and the current level. From there, two different types of multiplier can increase scores dramatically.

If enough water is contained on the game board, a rainbow will form across the board. When the rainbow is active, all scores are multiplied by 10. Only one rainbow can be present on the game board at any one time.

If any lake on the board has a water level reaching two layers of land deep, a rubber ducky will begin swimming in it. Only the depth of the lake is important; the lake can be as large or as small as is necessary. When a rubber ducky is on the board, all scores will be multiplied by two, stacking with each additional ducky that appears.

For example, if a fireball evaporates a lake for what amounts to 10,000 points, a rainbow is active and there are four rubber duckies active, the score will be:

The default tile set, available from the beginning of the game.

Awarded for a rank of "ok" across all game modes, this tile set replaces most uppers and downers. While the straight, I-shaped piece remains of both types, new pieces include triangular pieces, straight pieces of half the length as the I-shaped piece and a square upper, similar to the square ring piece, however with only a small hole in the centre.

Awarded for a rank of "expert" across all game modes.

Awarded for a rank of "super" across all game modes.

There are several game modes in Wetrix.

A no-frills game of Wetrix. The player starts at level 1 and plays to earn as many points as possible until the drain fills up. Smart bombs can be earned at level-ups. Ice cubes and mines appear normally.

A much more challenging game of Wetrix. In Pro Mode, the game begins at level 5. Additionally, bombs fall in pairs. Despite this, the player is still playing to earn as many points as possible. Ice cubes and mines appear normally.

A two player, split-screen game of Wetrix. Each player is given a game board of their own to play a game of Wetrix on. Whichever player's drain fills first loses. By evaporating water, each player can build up an attack meter across the bottom of their screen. Then, depending on how much power has been built up, players can either send ice cubes, water, an earthquake or bombs to affect the other player's game.

In Handicap games, special rules are in play that affect the board. With each level up, the rules will be reapplied.

The game begins with a layer of ice on the board. After a short amount of time, it will begin thawing. At level up, all water on the board is replaced with the ice layer.

The Earthquake Meter is partially filled at the beginning of the game and cannot be lowered. At level up, the floor raises slightly.

The game begins with various parts of the board raised to varying small degrees. At level up, the board partially resets; all pieces disappear and the land is reset, however the random areas of the land that are raised are determined by what areas of the board had pieces placed down before the level up.

The game begins with several bomb holes already in the board. At level up, all water disappears, a new set of bomb holes are placed in the ground and the player is given a set of uppers to repair them before more water returns.

The drain begins half-filled at the start of the game. At level up, the drain will reset to its half-filled state, regardless of how much water was there before.

In Challenge games, the player is presented with highly demanding game scenarios, but is also given a rare "win" condition. High scores are generally much more difficult to attain in this mode than any other.

The game only lasts for one minute. However, the game begins at level 10.

The game only lasts for five minutes. However, the game begins at level 4.

Only 100 pieces fall before the game is over. However, the game begins at level 8.

500 pieces fall before the game is over. However, the game begins at level 4.

The game begins at level 1 and proceeds like a normal game of Wetrix in Classic Mode. However, the pieces always fall according to a preset pattern. When the pattern is complete, the game ends.

In Practice Mode, the player can choose between playing a practice game of Wetrix or playing through one of eight tutorials.

The practice game plays like a normal game of Wetrix, but removes the rain, levels (and, consequently, ice cubes and mines) and falling pieces. The player can still fill the drain and lose, but is given a more slower-paced environment to practice strategies.

The tutorials teach the player basic game mechanics, preparing them for the first few levels of Classic Mode. The player can play the tutorials normally, or in a split-screen view, with a computer-controlled demo playing alongside them, showing a possible, if not recommended way to complete the tutorial. 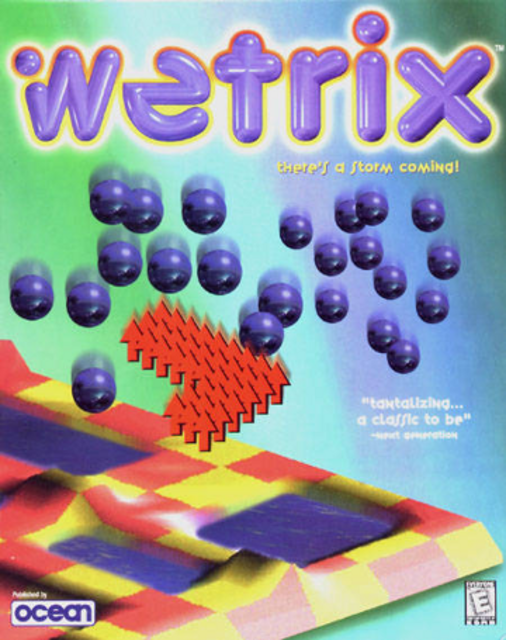