Town With No Name

A budget Amiga CD title released by On-Line entertainment notable for its low quality in all aspects of its production and presentation.

The Town with No Name is an interactive Western point and click adventure "game" akin to Plumbers Don't Wear Ties.

Gameplay consists of two modes a standard point and click interface usually with multiple options presented onscreen with a short animated scene following what decision the player has made. The other mode of the game is a light gun game played with the Amiga CDs' gamepad, or mouse and take out multiple villains not unlike Mad Dog McRee.

The Story of The Town with No Name involves "The Man With No Name" getting off a train at the station in the Town with No Name where he is immediately greeted with gunfire in a lightgun sequence. Once the miscreant is dispatched it is learned that the man the player just killed was "Evil Eb's Littlest brother" and the Evil Eb will gather up his posse and kill the player. The player then travel throughout the town in order to find and dispatch Evil Eb's posse while playing an assortment of mini-games, falling off balconies instead of taking the stairs, and collecting baked beans (425 of them to be exact). Once Evil Eb's posse is disposed of the player faces off against Evil Eb in a final showdown, once the player has beaten Evil Eb, Eb asks the player to kill him in a case of mistaken identity and they wind up friends in the end over a bottle of whiskey.

In the end, the player has 3 ways of ending the game: the protagonist can exit the town on horseback and murder a child because he runs after him shouting "Shane!"; he can be killed any number of ways throughout the game becoming the Ghost with No Name; and he can leave on the train 8 days later as the train leaves it moves up into outer space and then travels at the speed of light. 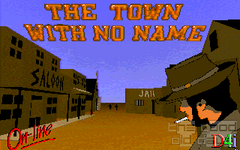