Wario starts a video game company as part of his latest get rich quick scheme. Join him and his friends as you play through the dozens of wacky microgames they have created.
Game Boy Advance Nintendo 3DS eShop Wii U

WarioWare Inc. is the first in a series of addictive "microgame" compilations starring Wario. Each game is extremely simple but the challenge becomes apparent as they start coming faster and faster.

Gameplay consists of playing very simple microgames one after the other as the speed and difficulty increase. Each game lasts only around 3-6 seconds, and uses only the A button and/or D-Pad to play. The game's instructions are usually given in the form of a single word (eg. Cut!, Pick! or Jump!) and they must work out how to beat it before time runs out. After playing a certain number of microgames, a Boss Stage is encountered. Unlike normal games these have no set time limit.

The main mode has the player play through a series of character stages. Each one contains a set of microgames based around a single genre, and ends when the Boss Stage is beaten (On subsequent plays, the Boss is followed by a character animation and the difficulty goes up, allowing the player to play endlessly). The catch is that the player only has four lives, and losing four microgames means Game Over. At a couple of points during the story mode, the genres played so far are jumbled up as a remix. There are further stages after the story is cleared that mix up every single game in an endless high score challenge.

The main menu is broken down into three parts. Games is where the character stages, remix towers and minigames are found. The Grid is where each individual microgame is cataloged, with its own target score. Each game can be played on a loop like the main modes, and a flower is shown on it's icon when it's target is cleared. Finally, the Options menu allows the player to view the story epilogues, change their in-game name and gender, and clear the save data.

According to the opening text, this game takes place in the year "200X".

The story begins with Wario sitting in his chair watching TV, when a news report about a successful video game (Pyoro) appears on TV. Wario, in his usual greedy way, sees a way of making some quick cash. Changing into his biker duds, he goes out and buys a laptop to develop games on, and turns his home into a business named WarioWare, Inc. He quickly becomes bored with working, so he calls up his Diamond City friends to do it all for him.

As each story ends (except the Introduction), that character goes to the Gelateria. Eventually all the characters are gathered there.

3 weeks later, WarioWare's first game goes on sale and Wario starts raking in the cash. Naturally, his staff start demanding their cut of the profits, so Wario grabs the cases of money and runs to the rocket he built on the side of the WarioWare, Inc. building. Crygor, who is still "swimming" through the skies, collides with the rocket. The money flies everywhere and Wario and Crygor fall into the ocean below, as the rest of the staff watch. After the cast credits roll, the game closes with Wario and Crygor paddling back to shore.

The credits are shown against a backdrop of flying blue stars. Holding L or R will turn the background stars green or red respectively and make the music sound muffled or like it's on the radio. Holding a direction on the D-Pad turns the stars into hearts, the Gamecube logo, the Wario "W" or the Triforce. Finally, letting the credits run until they finish temporarily changes the main menu music to a more peaceful version.

After the story is completed, there are four unlockable remix modes that include every microgame rather than a single genre. Each tower is represented by a different color pig.

By clearing stages and beating high scores in the main game, some playable minigames can be unlocked.

The original versions of these games also appear as microgames in 9-Volt's stage.

These two games were re-released as the standalone DSiWare game Bird & Beans.

While WarioWare, Inc. does not include traditional multiplayer games, there are four games that have two players use a single GBA, controlling the game with just one shoulder button each. Each game is played until somebody wins three rounds.

Every microgame is listed below, sorted in the same order as the Grid menu in-game. Each category is based around a certain genre, with the exception of the Intro games and Wario's games. There are 213 microgames total (13 in Intro Games, and 25 in all other categories).

There are two songs with Japanese vocals included in this game. They can be heard in their respective stages, during Jump Forever, or by pressing L on the Name Entry screen (which cycles through the two vocal songs and Crygor's Theme, like a very basic Sound Test).

The title has two English translations in other WarioWare games: "Drifting Away" in WarioWare, In.: Mega Party Game$ and "Floating Voices" in WarioWare: Smooth Moves. This song plays during Dribble's story stage, and during the Jump Forever game (after Dribble's Stage is beaten or the song selection is unlocked). The second section plays twice during Jump Forever.

Known as "Haru-Natsu-Aki-Fuyu" in Japanese. This plays during Kat's story stage and during Jump Forever once the the song selection is unlocked. When playing this song in Jump Forever, the "Home" lyrics (below) are shown.

These lyrics are shown when Four Seasons is selected as the song in Jump Forever, however they are not an actual translation of the Japanese song.

Reminding me of our home town.

My thoughts drifted back over our love's memory,

sweet dreams of the time our hearts bound.

Through a soft veil of pale, shimmering petals

My soul floats away, helpless in passion's sway,

I miss home: you are my home. 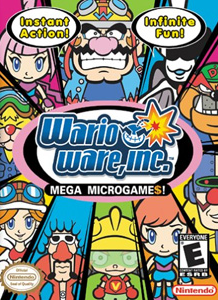