Return to Kanto filled with a whole new chapter to the game. With a brand new features and new ways to capture Pokemon, it time for whole new revolution.
Game Boy Advance

With the release of Pokémon FireRed and LeafGreen, the back-story of Pokémon was blasted into the main frame once again. Players return to Kanto in this Game Boy Advance remake of the classic Pokémon Red and Blue Game Boy games, bringing along with it many of the improvements made in previous generations.

Pokémon FireRed and LeafGreen were released for the Game Boy Advance on January 29, 2004 in Japan, September 9, 2004 in North America, September 23, 2004 in Australia, and October 1, 2004 in Europe. FireRed/LeafGreen was developed by Game Freak and published by Nintendo. The games are enhanced remakes of two of the original Pokémon games: Pokémon Red and Pokémon Green (only released in Japan). The two games were the first to use the Game Boy Advance Wireless Adapter, which came with the game cartridge. As part of a special pre-release promotion, players who pre-ordered the game could get it early at the New York Pokémon Center. FireRed/LeafGreen, Pokémon Ruby and Sapphire, and Pokémon Emerald make up the third generation of Pokémon games.

Being remakes of games from the first generation, the game has the original 151 Pokémon. In addition, there are Pokémon from later generations. This game marked the first time that all 151 original Pokémon were available on Game Boy Advance Pokémon games, as the Game Boy and Game Boy Color games were not compatible with games in the third generation. FireRed/LeafGreen is set in the region of Kanto, with the two main characters Red and Green both fighting towards the ultimate goal of winning against the Elite Four. Despite being sold as separate games, FireRed and LeafGreen are virtually identical, except for a few minor Pokémon differences.

FireRed and LeafGreen retains the traditional Pokémon gameplay; with some updates, as usual. The game consists mainly of three different screens: the overworld, battle screen, and menu. The overworld is in a top-down viewpoint. Players control either Red or Green, as they traverse the region of Kanto. Scattered in the overworld are non-playable characters that the player can interact with, and occasionally, battle against.

There are two types of Pokémon battles: with a wild Pokémon or with another Pokémon trainer. These two only differ slightly. The menu options are the same: fight, use an item, switch out the active Pokémon, or flee (not available for use in a trainer battle). Wild Pokémon can be captured via the use of a Poké Ball, of which there are a variety of types. There can be six Pokémon in the player's party at once, and all of them gain experience points once a battle is won. After leveling up enough, then the Pokémon may evolve into a better species of Pokémon.

There are many new features in the game. A "Help" feature has been added, which has data accessible at any point in the game on just about everything that can happen in the game. Also included to make the game more accessible, the last four significant events that the player did before saving the game is showed upon loading a save game. New game mechanics (both in and out of battle) have been included as well.

The VS. Seeker is a key item that can be obtained at some point in the game. The VS. Seeker allows the player to search for nearby battles (although it doesn't work on Gym Leaders, in caves, or in buildings). Technical Machines (TMs) can also be taught to Pokémon by a new non-playable character called the Move Tutor. The Sevii Islands, a location with Pokémon from the Johto region and Hoenn region, as well as events and special items, has been added to the game. Other new features include double battles and the Fame Checker.

Pokémon FireRed and LeafGreen take place in the region of Kanto. Within Kanto are a variety of cities, routes, and other locales. Some areas aren't accessible right away, usually when a special ability is required or a quest must be cleared before the area becomes accessible. For example, the HM (Hidden Machine) Surf allows the player to access Cinnabar Island.

The game opens with the protagonist (either male or female, an option not available in the original versions of the games) arriving in Pallet Town. Professor Oak invites the player and the opponent to his lab in order to choose a starter Pokémon (either Charmander, Bulbasaur, and Squirtle).

The rival character will choose whichever Pokémon's ability is superior to the player's choice. The player and rival set off on an adventure to become a Pokémon trainer, and eventually defeat the legendary Elite Four. To complete this goal, the player must defeat the eight Gym Leaders for their Gym Badges (each Gym Leader uses a specific type of Pokémon).

After gathering all eight badges, then the player can challenge the Elite Four in hopes of defeating them and becoming the Champion.

Along the way, the player is constantly battling Team Rocket, an evil organization that misuses Pokémon led by the infamous Giovanni. 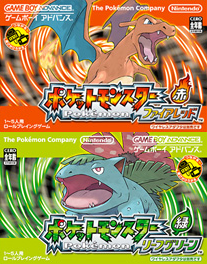