Boktai 2: Solar Boy Django is the second installment in the Boktai video game series, and the sequel of Boktai: The Sun is in Your Hand. It introduced a number of gameplay modifications, notably switching its focus from the stealth aspect of its predecessor to a more action-oriented game.

Following the first game of the series, Django returns to the city of San Miguel, only to have his Solar Gun stolen by a mysterious vampire and find that the city has been overrun by the Undead. Using San Miguel as a central hub, he proceeds through several dungeons as an attempt to stop the Undead from invading the city of the Sun.

As opposed to the stealth-oriented Boktai: The Sun is in Your Hand, Boktai 2 is more of an action RPG, allowing the main character to upgrade his stats by leveling up in battle. A wider assortment of weapons is also available, while the previous game only allowed the player to carry a customisable gun. The new weapons were divided into different categories, including swords, lances and hammers. In addition, the new Solar Forging feature allows two weapons to be crafted together in order to form a new, more powerful one.

Despite all these changes, however, the main feature of the series, the solar sensor, remains. It is necessary during boss "purifications", and greatly helps the player by uncovering hidden secrets and recharging his or her character's "solar gauge".
Slime MoriMori Dragon Quest: Shougeki no Shippo Dan Juka and the Monophonic Menace Dragon Quest Heroes: Rocket Slime Dragon Ball: Origins Back to Stone Sigma Star Saga The Legend of Zelda: Spirit Tracks Sword of Mana Dragon Ball: Origins 2 Bastion Pirates of the Caribbean: The Curse of the Black Pearl 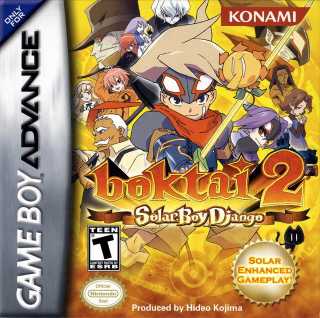