Xevious is one of the first vertical scrolling shoot-em-up arcade games.

Xevious is a vertical scrolling shoot-em-up developed by Namco and released in the Arcade in 1982. It is one of the first games of its genre, and contributed many things to that genre, including the concept of bosses. The game is known for having one continuous level, featuring forests, bases, temples, and waterways. Xevious was a huge cult hit in Japan, despite its limited popularity in the United States. The game was also considered to be the first Arcade game to have a television commercial aired for it in the United States.

The player controls a Solvalou, a combat aircraft containing both a front-firing "shooter" for anti-air combat and a "bomber" for air-to-ground bombing runs. The game contains both enemy aircraft and enemy ground units, such as tanks and turrets. It is one of the first shoot-em-ups to include hidden bonuses, which could be uncovered by bombing particular areas in the game (these include the SOL towers, which takes one bomb to reveal and one to destroy, and special flags). It is also one of the first shoot-em-ups to include a boss, the massive flying fortress Andor Genesis.

The game was also known for its glitches and Easter eggs. It's possible to see a short message showing the programmer's name by moving to the bottom-right of the screen, holding down the bomb button and destroying the first two enemies. Another rare Arcade glitch gave the player countless amounts of lives.

Xevious was ported to many systems, including the NES, Atari 8-bit, Atari 7800, NEC PC-8801, NEC PC-9801, MSX, FM-7, ZX Spectrum, Commodore 64, Atari ST, Apple II, Amstrad CPC, Sharp X1, and the Sharp X68000. The original Arcade game has been in many of Namco's compilations, including Namco Museum Volume 2 for the PlayStation, Namco Museum: 50th Anniversary for the PlayStation 2, Xbox, and Gamecube, Namco Museum Remix for the Wii, Namco Museum DS for the Nintendo DS, Namco Museum Battle Collection for the PSP, and Namco Museum Essentials for the PlayStation Network (PS3). The game was released as a Xbox Live Arcade game on the Xbox Live Marketplace for 400 MSP ($5), which was later included in Namco Museum: Virtual Arcade for the Xbox 360. The game was also part of the Microsoft Revenge of Arcade compilation for the PC. The NES version of Xevious was also released for Game Boy Advance as part of the Classic NES Series. Mobile versions were reeleased in 2016 by Dream Factory.

Xevious spawned a few obscure sequels. Super Xevious, released a year later on the arcades, was a harder version of the original with several new enemies. Solvalou, released in 1991 in Japan, is a version of Xevious shown from the first-person perspective. 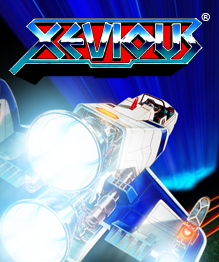