A scrolling platformer for the Nintendo Entertainment System developed by Hudson Soft, the game was an adaptation of the Westone/Sega arcade game Wonder Boy featuring an employee of Hudson wearing a grass skirt.
Game Boy Advance

In addition to these ports, Adventure Island was released on the Game Boy Advance as part of the Famicom Mini Series in Japan, along with several other classic NES games. On the PlayStation 2 and Nintendo GameCube, Hudson Soft released a graphically updated remake titled Hudson Selection Volume 4: Adventure Island (as part of their Hudson Selection series, a Japan only series of updated Hudson games).

Published and developed by Hudson Soft, Adventure Island is essentially a port of an arcade game titled Wonder Boy (which, in itself created a separate successful game franchise). Wonder Boy was developed by Escape, who sold the rights to the title of the game to Sega, and the rights for an NES port to Hudson Soft (who were forced to change the name to Adventure Island). Adventure Island retains all seven levels from Wonder Boy, and also includes the bonus stage found in Wonder Boy (as the eighth level). In addition, character and enemy design is almost completely the same, with only minor graphical changes made depending on the version of the game.

The game stars Master Higgins, who is based off of the Hudson employee Takahashi Meijin (who is the main character in the Japanese version of the game). In the game, Master Higgins is trying to save Princess Leilani, who has been kidnapped by the Evil Witch Doctor.

Adventure Island later had an anime series that ran in Japan in 1987 titled Bugutte Honey (which can be Americanized as Honey the Bug). Bugutte Honey later had a game released based on it, titled Takahashi Meijin no Bugutte Honey for the Famicom. The game follows Honey Bee, who is a power up in Adventure Island (she makes Master Higgins temporarily invincible), and three "real world" game masters (similar to Captain N: The Game Master) as they attempt to rescue Genjin Takahashi from Kyura the Great. The show ran for 51 episodes.

A traditional side-scrolling platformer, Adventure Island is similar to Super Mario Bros., although there are several gameplay aspects that differentiate it from other platformers. A port of an arcade game, Adventure Island retains the eight stages found in this game. Each of these eight stages consists of four levels (or rounds) that have varying themes, e.g. frozen cave, ocean, etc. The main goal of the game is to complete each level, which must be done as quickly as possible (due to Master Higgins's consistently dropping life bar).

The game has a wide variety of power ups, which can be found in eggs spread throughout the game's levels. These power ups include the well known skateboard (which allows Master Higgins to go much faster), weapons (such as the ability to throw axes or rocks), health regeneration (especially milk, which completely restores Master Higgins's life bar), and fairies (which make Master Higgins completely invincible for a short time). As well as beneficial items, occasionally an egg will contain an eggplant, which drains Master Higgins's health at a much faster rate. 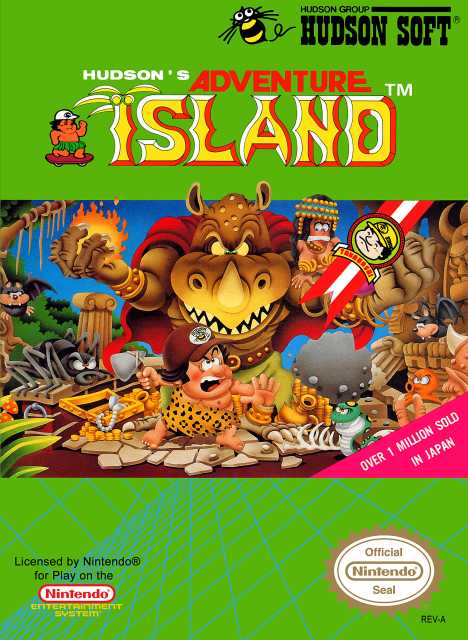