This flight simulator allows players to fly six different aircraft on both sides of three separate conflicts. Missions begin with a briefing and some flying advice by none other than sound barrier-breaking Chuck Yeager(!), with voice recordings of him saying things like "talk about long odds!" and "check six!"

This game is unusual in that it takes place over three distinct eras of air combat, rather than focusing on one. This gives players a firsthand look at the development of air combat, and the technologies and corresponding tactics as they evolve over time.

The earliest conflict in-game is World War II. On the US side, players take seat in the famous P-51. German pilots use the very capable FW-190. You can take part in missions that were common over Europe at the time, with allied B-17's and B-24s requiring escort from P-51's and other non-player aircraft as they are swarmed by Me-109's and FW-190's. World War II air combat in this game is very up-close and comparatively simple, as players use gun-armed, piston-powered planes to accomplish their objectives.

Cranking up the speed a few notches, players move on to the Korean War, flying either F-86 Sabers for the USAF, or MiG-15's for the North Korean/Soviet side. This is an interesting point in air combat history. While the weapons of the fighter planes remain the same, ( in the case of the F-86, the same set of six M2 Brownings that the P-51 had) the Korea War saw the world's first jet vs. jet dogfights. Players will notice that the same tactics that kept them alive in World War II dogfights will work just as well over Korea, albeit at a faster pace and a bit farther apart at times due to the higher speeds. The F-86 and MiG-15 are, as in real life, very evenly-matched in this game, so victories will be decided by skill, rather than technological advantage.

The next conflict,the Vietnam War, continues with jet vs. jet combat. American pilots use the F-4 Phantom II and North Vietnamese pilots fly the MiG-21. Vietnam introduces players to new technologies such as the guided missile, radar, and afterburner. Fighter planes became more complicated, heavier, and faster than they were in Korea. The main weapon of the fighter plane shifts away from guns and toward missiles.

While in earlier conflicts, players had a choice of two roughly-equivalent fighters, in Vietnam missions the choice of side greatly alters the capabilities of the aircraft used. This means the tactics that must be employed to fight effectively are altered as well.

The American F-4 Phantom is a large, heavy, fast, complicated aircraft that was loaded with some of the most advanced radar and missile equipment available in the 1960's. It was designed as an interceptor, rather than a close-up dog-fighter. As such, while it boasts good speed, climb, and dive rates, it does not turn nearly as well as potential opponents. Like USAF, USMC, and USN pilots of the time, players must force the F-4 to fight effectively in environments that it was not designed for. In this game, the F-4 must rely on the better range of its AIM-7 missiles, much more powerful radar, AIM-9 Sidewinders, and high top-end speed to compete with foes. A good tactical playbook and situational awareness will allow players to use the F-4's strengths against enemy weaknesses. Effectively turning what may look like a sluggish, overpowered brick into something that can make MiG-21 and MiG-17 opponents mess their g-suits.

In contrast, the MiG-21 is small and agile, armed with guns and close-range heat-guided missiles. It is not as fast as the F-4, but is better in a horizontal turning fight. The MiG-21, in game, is extremely agile and responsive to controls, and is optimized for close-and-dirty knife fights. It is also equipped with a radar, but not nearly as powerful as the F-4's and not used for guiding missiles to targets. Also, turning on an active radar is much like setting alight a lighthouse beam, alerting any opposing fighters of your presence and location. Thus, MiG-21 pilots in this game are advised not to use radar, instead sneaking in as close as possible to the F-4 and launching IR-guided missiles or gun attacks to lure them into a turning fight. This is an interesting historical match-up that will give players a wide range of tactical scenarios to explore.

As a historical note, F-4 pilots in Chuck Yeager's Air Combat have advantages that real-world F-4 pilots over Vietnam did not have. Firstly, early versions of the real F-4 had no internal gun, and were completely dependent upon missiles. Given the questionable reliability and accuracy of missiles of the day, especially the long-range AIM-7 Sparrow, this put American pilots in a difficult position when faced with a gun-armed MiG-17 or MiG-21 within the range of five miles. Further, politics of the day prohibited US pilots from attacking at long range via radar, instead, forcing them to close within visual range for a visual ID before engaging. This forced them into less-than-ideal situations against MiGs that were designed for just such an occasion, nullifying one of the F-4's major advantages and forcing it into close-in turning fights it was not optimized for (much like asking a submarine to surface in broad daylight before it attacks).

This game puts pilots in a later version of the F-4, the F-4E, which has an internal 20mm cannon in the nose. Also, there are no restrictions on the use of BVR weapons like the AIM-7 (aside from their inaccuracy,) so F-4 users are advised to maximize the use of these tools.

Close-in, virtual Phantom drivers are advised to use the F-4's better performance in the vertical plane, climbing and diving rather than being tempted to try and turn with a MiG; you'll never win that fight. Instead, use the F-4's ability to zoom and dive to get our nose pointed at the MiG, and employ your guns or AIM-9's, depending on the situation.

Virtual MiG-21 pilots in this game are advised to do just the opposite. Don't try and run straight at an F-4 when you first spot one at long range; a handful of AIM-7's will tag you before you have a chance. Instead, hide behind cover or fly evasively to try and goad him in close. Get in like a parasite and use the horizontal plane, where the F-4 cannot turn with you, and keep turning until you get a good shot at the tailpipe. Then, you have your choice of 23mm cannon or IR-guided missiles. Hope he does not outrun you. 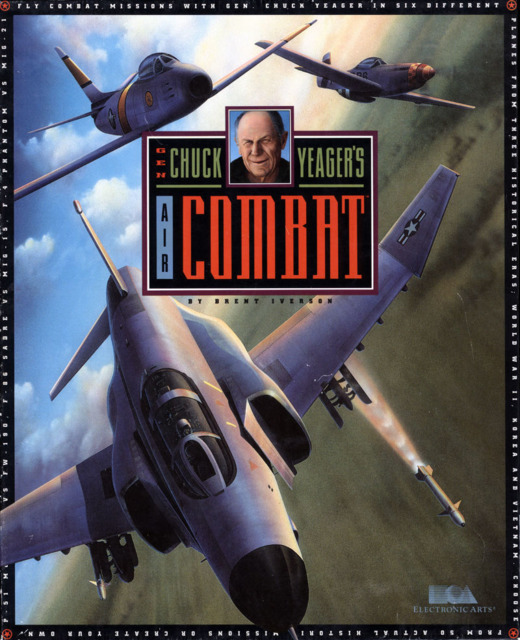