A first-person action game with RPG elements in which the player can brutalize their foes with might, magic, or both. Or kicking.

Dark Messiah of Might and Magic is a first-person spin-off of the long-running Might & Magic franchise. The story follows Sareth, a wizard's apprentice, in his attempts to retrieve the "skull of shadows", an artifact found near the beginning of the game. The game was developed by Arkane Studios, makers of Arx Fatalis and later Dishonored.

Dark Messiah's gameplay mixes first-person melee combat with RPG elements, similar to the Elder Scrolls series. A variety of weapons are available, including swords, staves, and bows. Each weapon or armor type has several variants with different enchantments that enhance their properties.

Much importance is placed on using the environment in combat. Throwing or kicking enemies against spike beds, off cliffs, into fire, or into breakaway supports are among the most effective strategies.

Later, the player earns demonic powers that grant added strength when using melee, but slowly siphons health as a consequence (as well as frightening nearby friendly NPCs, which can cause mission failure).

Dark Messiah also features a skill system similar to those found in other RPGs. By accomplishing missions or reaching specific points, the player earns skill points which may then be used to unlock and develop new skills and techniques. The points can be placed into three categories:

This allows the player to specialize their character to their personal needs. There is no way to max out all skill trees in a playthrough, even by completing optional mission objectives, so specialization is encouraged.

The game has up to four multiple endings, though all choices appear only in the last two levels. The first choice relies on completing an optional objective to purge Sareth of his demonic abilities, and the second is immediately after the final boss on whether to join or destroy the soon-to-be-awakened lord of darkness.

Dark Messiah also has an inventory system. Items can be picked up from dead enemies, looted from crates, given, or pickpocketed, similar to many other RPG releases.

Shield - Sareth can now use a shield to block enemy attacks like arrows and flame arrows.

A powerful strike that will knock the enemy off balance. (Jump Power Strike)

A rotating attack that hits several enemies at once, killing most of them on the spot. (Crouch Adrenaline Power Strike)

Allows the player to stock more Adrenaline and in fact two Fatalities (instant kills) in a row.

Allows Sareth to see in the dark.

Sets a magical trap that the enemy can't see. Explodes when an enemy is near. Inflicts fire damage.

Sprays a non-lethal ice-cold substance that freezes an enemy for a couple of seconds. Creates a slippery pool of ice if it hits the ground.

Create a lightning projectile that will electrocute the target enemy. Bounces off walls. Deals electrical damage. Cast on enemies standing in the water to enhance the damage!

Send out a ball of fire that will explode on contact, hitting the target enemy and all nearby creatures. Cast and hold to guide the projectile. Deals fire and area damage.

Grab and move objects from a distance. The more mana, the heavier the objects that can be lifted.

Charm a hostile creature and get it to fight alongside Sareth for a limited time.

Create a magical shield that will block physical attacks and magic projectiles for a short period of time.

Weaken an enemy for a short period of time.

Allows the player to use stamina-based skills such as sprinting, swimming and kicking for a longer time before having to rest.

Raises the player's maximum Health and also effects the kind of armor the player can wear.

Makes the player almost invulnerable to any kind of poison.

Increases the health regeneration rate of the player.

Highlights hidden items and secret areas if the player remains still for a moment.

Allows the player to creep up on enemies from behind and stab them for a quick kill.

Allows the player to pick locks on doors and chests.

Increases the Mana regeneration rate of the player.

NOTE: Staffs are slow weapons and don't really inflict much damage, but can be quite useful when fighting packs of enemies, seen that they can easily stun or knock down enemies.

Dark Messiah of Might and Magic is divided into 9 Chapters plus a Prologue and an Epilogue.

Dark Messiah features a Multiplayer portion that was developed independently, by Kuju Entertainment. Many people have drawn parallels to it and the battlefield franchise. Two playable factions exist: Human, and Undead. The two teams compete on a large map, vying for strategic positions.

The original score for Dark Messiah of Might & Magic was composed by Cris Velasco and Sascha Dikiciyan.

As displayed on the back of the box. 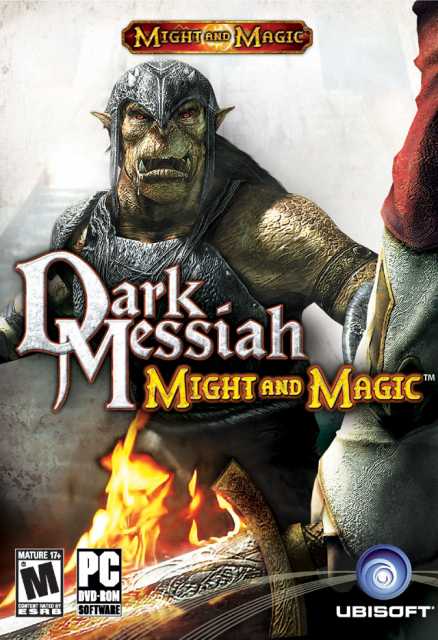