The sequel to Elf's popular dating sim series. The highschool-aged protagonist only has the two week Winter vacation to find a girlfriend.

Doukyuusei 2 ("Classmate 2") is an eroge dating sim visual novel and the sequel to the original Doukyuusei. As its name suggests, the player is a high school student who has a selection of 15 women, many of whom are classmates, to romance by spending time with them and learning more about their hobbies and their lives. Instead of having a whole school year, the player only has the two weeks of Winter vacation to find a girlfriend.

Doukyuusei 2 was originally released on PC MS-DOS in 1995 and eventually ported to consoles in 1997. The console versions removed the eroge content for the most part. The Super Famicom version of the game was one of the first to be specifically released via the Nintendo Power cart-writing service; the game was never made available in retail cart form for that system. Doukyuusei 2 was also adapted into a 12-episode anime. 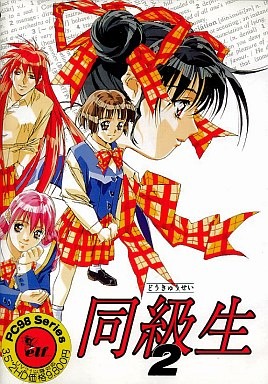