An action RPG released by Nihon Falcom in 1985 that was the company's first blockbuster success, becoming one of the best selling Japanese PC games of all time.

Dragon Slayer II: Xanadu (ザナドゥ) is an early action RPG developed by Nihon Falcom and designed by Yoshio Kiya. The title was released in November 1985 for the Sharp X1 as well as the NEC PC-88 and was later ported to a number of other computer platforms in the years to follow. Xanadu was the second installment in Falcom's Dragon Slayer family, although it shares little in common with the first game. The title was a landmark release for Nihon Falcom with the game selling around 400,000 copies, making it one of the best selling Japanese PC games of all time.

Dragon Slayer would continue with its next entry in 1986 called Romancia but, due to its popularity, Xanadu would spawn its own sequels and spin-offs outside of the Dragon Slayer series. Xanadu Scenario II would release in 1986, which was an expansion pack to the first game, and The Legend of Xanadu would be published in 1994 followed by many other games and remakes.

Xanadu is a dungeon clawer where the objective is to explore a 10-level dungeon in order find the legendary Dragon Slayer sword and use it to defeat the evil dragon Galsis. The game plays out through two different perspectives: a side-scrolling view used for exploration and a top-down view used during battles. Combat is similar to Dragon Slayer with the player and enemies moving around in real time with the player damaging monsters by bumping into them. As the the player explores the dungeon they can also obtain money to buy equipment, learn magic and increase their stats as they continue their quest to defeat the dragon. Some systems unique to Xanadu include the karma meter which increases if the player defeats too many monsters that are considered "good." If the meter is too high, the player won't be able to obtain the Dragon Slayer or enter the final area. Weapons can also be leveled up individually based on how much the player uses them and there is even a food system where players need to eat more food the higher their level is. Additionally, the number of monsters in Xanadu's game world are fixed, meaning that if the player didn't manage their resources correctly the game could become unwinnable. These elements, among many other obtuse mechanics, made Xanadu one of the most difficult RPGs of its day.

Shortly after Xanadu's release in Japan, Nihon Falcom approached the creators of the Ultima series, Origin Systems, with the idea of publishing Xanadu in North America. Origins was also looking for a partner that could bring Ultima IV to the Japanese PC market so the company's co-founder, Richard Garriott, flew to Japan to discuss a deal with Falcom. However, it was soon discovered after Xanadu was demoed to Garriott that Xanadu's character art for the shopkeepers plagiarized artwork from the manual for Ultima III. Because of this, the deal with Origin fell through and Falcom settled the issue out of court by paying a settlement to Origin and changing the shopkeeper graphics in future re-releases [7].

Xanadu's popularity in Japan lead to the game being adapted into other media. An illustrator that worked at Falcom in the 1980s named Kazuhiko Tsuzuki, who was also responsible for creating the artwork for the MSX version of Xanadu, drew a manga based on Xanadu in 1987 called "Xanadu: The Legend of Dragon Slayer." The story for the manga was very different from the game, containing sci-fi elements and staring a solider from the future who is transported to the fantasy world of Xanadu. The next year, in 1988, the manga's story was adapted into a direct-to-video anime OVA produced by Toei Animation. Additionally, while not exactly adaptations, the heavy metal band ANTHEM created a single in 1986 that was themed after Xanadu and Hobby Japan also created a board game based on Xanadu in 1987 called "Xanadu: The Legendary Sword." 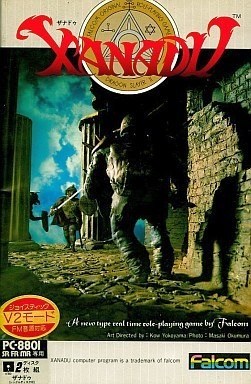