The Outfit is a squad based 3rd person shooter set during WWII in Europe as you have the choice of taking control of three different characters, commanding their squads, calling in destruction and defeating the Nazi war machine.
Xbox 360 Xbox 360 Games Store

The Outfit is a squad-based 3rd person shooter developed by Relic for the Xbox 360. It was released March 13, 2006 to underwhelming reviews,

although it was the first Xbox 360 game to have a pre-launch demo. Set in a War-torn Nazi invaded Europe, the player has the choice to play as one of the three different Outfit squad leaders, each with different weapons and traits. At the beginning of each level players our dropped at a American controlled strategic point, the main goal being to slowly work through the level capturing the rest of the points from the Nazi's while completing special missions such as protecting a tank or shooting down Nazi planes. During the game, the player will have the ability to command a 5 man squad with basic commands such as Assault or Suppress, the death of squad members will result in the player having to spend Command Points (gained by capturing Strategic Points) to have reinforcements dropped in. Command Points are also used on The Outfits claim to fame "Destruction on Demand" where players can order things such as Tanks, Cars, Reinforcements, Turrets and Airstrikes to be dropped from the sky, therefore rewarding players for capturing strategic points.

As the leader of The Outfit, Deuce has had to earn the respect from his men in battle. He's even turned down multiple promotions in order to remain in the battle where he can fight with his men.

Though J.D. Tyler was born and raised in New York City, he spent his early days in New England, where his grandfather taught him stealth, tracking and marksman skills.

Tommy Mac is a big Iowa farm boy. All brawn and no finesse, his straightforward style and incredible strength have earned him a reputation for getting the job done.

The Outfit's main multiplayer feature is Online Versus, in which two teams of eight battle for control of the strategic objectives. When players pick the Axis, they will have the choice of three German characters from the story mode, each of which have almost parallel weapons and traits to those of the allies. There are thirteen maps with an additional 3 maps as DLC.

The Outfit's second multiplayer feature is split-screen Co-op which allows 2 players on the same console to play through the story mode together, allowing for even more destruction! 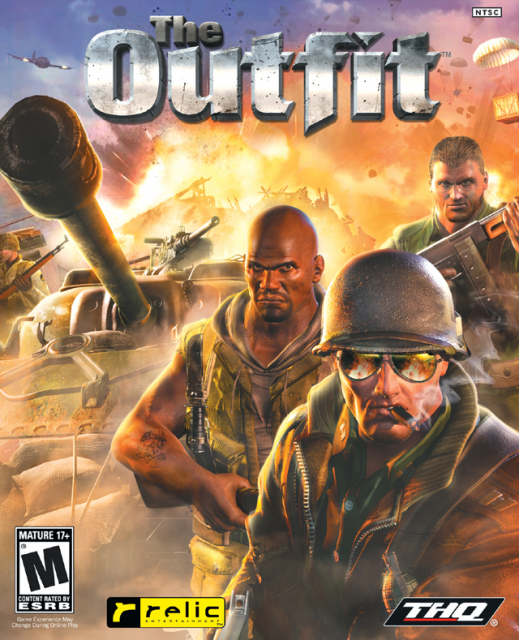