The origins of Dracula and the Belmont clan are revealed for the first time in this 3-D action title of Castlevania for the PlayStation 2.
PlayStation 2 PlayStation Network (PS3)

Castlevania: Lament of Innocence is an action title developed by Konami and released on the Playstation 2 on October 21st, 2003. Most Castlevania games have been known for providing a seamless 2D experience across linear levels, where you, a member of the Belmont clan, must battle your way through a massive castle infested with zombies, medusa heads, crows, bats,etc in order to to reach the top and destroy the king that embodies all that is evil, Dracula. Lament of Innocence is Konami's third attempt at developing a 3D vampire slaying adventure worthy of the Castlevania name. Unlike previous 3D iterations, you have no control over the camera since it's completely fixed similar to other PlayStation 2 action titles like Devil May Cry and Onimusha.

The combat is similar to that of other action games like Devil May Cry and Onimusha. The classic Belmont whip is your primary weapon throughout the game. Leon starts off with two basic whip attacks: light in which damage is minimal but the attacks are faster and heavy in which it deals more damage but the attacks are slower which leaves the player wide open for counter attacks from the enemy. The more you use your whip, the more skills are unlocked. You can string the learnt skills together to create devastating combos. Leon also carries secondary weapons and they are none other than Castlevania's classic sub-weapons which include: Axe, cross, holy water, knife and a new one, the crystal. Following Castlevania tradition, these sub-weapons require certain amount of hearts before they can be used but since most of the rooms in the castle contain chandeliers, that when destroyed, awards you with hearts.

Exclusive to Lament of Innocence is the use of orbs. Depending on the orb that Leon has equipped, the sub weapons can unleash different magical attacks. For example, the blue orb combined with holy water releases an attack called energy gazer that unleashes water from above the ground in front of Leon resulting in a devastating blow for enemies. Also scattered throughout the castle are relics that grant Leon with special abilities like running faster or boosting attack power in exchange for MP. Even though Leon has HP (hit points) and MP (magic points) there is no leveling up. In order to increase these stats you must find the hidden items that will boost these attributes. Some enemies have elemental weaknesses to ice, fire or lighting. You can find their respective whips hidden around the castle.

Throughout the game, Leon will be able to acquire different items that will assist his quest to destroy the evil in the castle.

These items will be uses instantly upon collecting them, as opposed to keeping them in Leon's inventory.

Magical items that have wonderous effects.

The story takes place during the 11th Century, officially making this the first entry in the Castlevania timeline. You play as Leon Belmont, an undefeated noble knight that fights in the name of the church. While waging war in distant lands, he learns from his good friend Mathias that his wife-to-be Sara is abducted by a vampire that goes by the name of Walter Bernhard. Leon calls for aid from the church to assist him in defeating the dark lord but he finds no support. He then decides to give up his prestigious title of knight in order to embark on a journey to save his beloved one. During his quest he meets Rinaldo, a mysterious shopkeeper who lives just outside of the castle grounds. He tells Leon that Walter loves to play with his guests and in order to face him in battle he must first defeat five guardians in each section of the castle. Leon was unarmed since he gave up his title as a knight but Rinaldo gives him a whip made of alchemy in order to fight the guardians and the monsters in the castle.

While fighting the guardians, Leon learns of the crimson and ebony stones. Walter posses the ebony stone which he uses to plunge the surrounding forest into darkness creating eternal night. However, he does not possess the crimson stone which, if combined with the ebony stone, grants the user immortality. Leon also learns of Rinaldo's dark past: Walter kidnapped Rinaldo's daughter and turned her into a vampire. She murdered both Rinaldo's wife and son. He had no choice but to kill his own undead daughter. With his family dead by the hands of Walter, Rinaldo challenged him to a dual but lost and was spared by Walter to provide assistance to any traveler willing to take on the dark lord.

Once all five guardians were defeated, Leon meets with Walter on the steps before the castle keep. Walter is holding Sarah and Leon demands for her to be released which he then complies since she has already been bitten by the vampire. Leon is not able to fight Walter because his whip of alchemy doesn't have any effect on him. He decides to take Sarah to Rinaldo's cottage. Rinaldo cannot save Sarah; the curse of the vampire cannot be lifted unless he is defeated. Rinaldo tells Leon that the only way to defeat Walter is by adding his love for Sarah into the whip of alchemy and the only way to accomplish this is by Leon killing Sarah while she's still a vampire. Leon refuses to strike down his beloved one but Sarah convinces him that she doesn't want to be a vampire. Leon complies with Sarah's request and kills her with the whip thus the vampire killer is born, the whip that's to be handed down from generation to generation of Belmonts for the coming centuries in the fight against evil. Leon, with revenge on his mind, heads for the castle keep.

Upon arrival of the keep, he battles with Walter, who is now surprised that the whip has an effect on him. Leon easily takes him down but before he delivers the final blow, Death comes in and sucks all the energy from Walter in order to transfer it to his new master, the owner of the crimson stone, Mathias, Leon's long time friend. Mathias possess both the ebony and crimson stones, making him the most powerful vampire in existence. Mathias curses God because of the loss of his beloved one due to illness. Mathias offers Leon to join his ranks among the darkness but he refuses and instead vows that the Belmont family will always fight against him and his minions of the night. Mathias flees and leaves his right hand Death to deal with Leon. After the battle is over, Leon escapes the castle.

Mathias goes into exile and curses God for decades, slowly losing his humanity and becomes the lord of darkness, Dracula.

The two previous 3D iterations of Castlevania released on the Nintendo 64 were not fan favorites and this is why Lament of Innocence had a cloud of skepticism surrounding it ever since it was announced for the Playstation 2. However, the game garnered somewhat good reviews from different gaming outlets and it seemed like a promising new start for the franchise in 3-D.

The most common criticisms made on Lament of Innocence are the repetitive environments, the awkward platforming (thanks to game's fixed camera) and the excessive backtracking.

Upon completion of the game, there are a few hidden goodies that you can play around with:

The soundtrack for Castlevania: Lament of Innocence was, as usual, composed by Michiru Yamane. 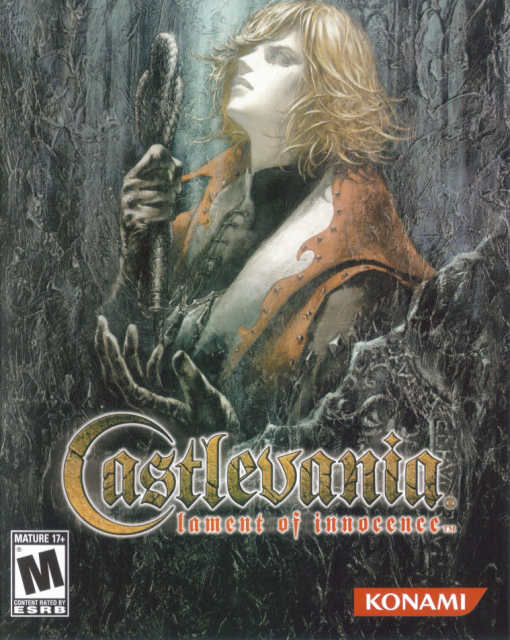