Unlock sidequests and save the world in Square's follow up to Secret of Mana.

Legend of Mana, the fourth entry in Square Enix's enormously popular Seiken Densetsu series (known as the Mana series in the U.S.), is the followup to the cult SNES classic Secret of Mana. Striking some controversy with the fan base, Legend of Mana introduced the "Land Make" system, requiring players to "plant" new areas to which to travel and forward the story. The premise for this mechanic roots from the destruction of the world, leaving the player to restore it by locating items corresponding to different land areas. Placement of these artifacts on the map relative to the home area or other locations and the order in which they are placed determines items, battles and quests the player will discover there. As the story is not at all linear, and essentially a series of side quests linked by several story arcs, the player can pursue the quests and place the artifacts as they see fit. This has led to criticism that the game's story is shallow, as it is essentially a run of connected (some less so) side quests, several of which the player may be locked out of completing depending on the order in which certain story arcs are pursued.

There are several elements of play that define Legend of Mana, most notably that its combat takes place in real time, as opposed to the traditional turn-based system expressed predominately in the Final Fantasy franchise, meaning the player had direct control over the character. While the player exerts no control over the other members of its party, another player can via the second controller, effectively creating a somewhat limited multiplayer experience.

In addition to the NPC s recruited by the main character through the story, the character will also encounter eggs that they will be able to raise into pets through the monster corral, one of several elements unlocked via side quests associated with the main characters home. These pets can be fostered into companions with their own special abilities to improve combat situations. Note, these pets could be raised using the Sony PocketStation peripheral, exclusive to Japan and also used in Final Fantasy VIII.

As well as the monster corral, the main character can unlock an orchard to grow fruit. The character provides seeds to the orchard keeper, an anthropomorphic tree. The amount and kind of seeds distributed, as well as the levels of mana on the home area of the map, determine the fruit produced.

Further, related to the home area of the main character, a workshop area also exists, again, much as above, unlocked upon completion of a side quest. Using various raw materials, the player can create various instruments, weapons, armor and golems. The golems, much like the pets and other NPCs, accompany the player and provide aid in combat.

Players have the option to have a variety of sidekicks fight along side them in combat. These characters can be AI controlled or a second player can take control of one sidekick using another controller. Sidekicks consist of various support characters such as Elazul and Niccolo. The pets mentioned previously, cannot be controlled by the second player. With the use of memory cards, two players can play together as their own main characters, instead of second player having to use the sidekick characters. However, this experience is limited for the second player.

As mentioned above, the most unique aspect of Legend of Mana is how non-linear it is, allowing the player to go as far as to create their own map. Completing side quests gives the player artifacts that the player can then place anywhere on the map to unlock new regions. Placement on the map dictates elements of the unlocked regions, such as difficulty and the type of items found or sold in these areas. Proximity to the home area or other artifacts affect this, as does the "mana level" of that map area upon which the artifact is placed. This adds an element of strategy when opening new regions to explore and the order in which to place the artifacts. 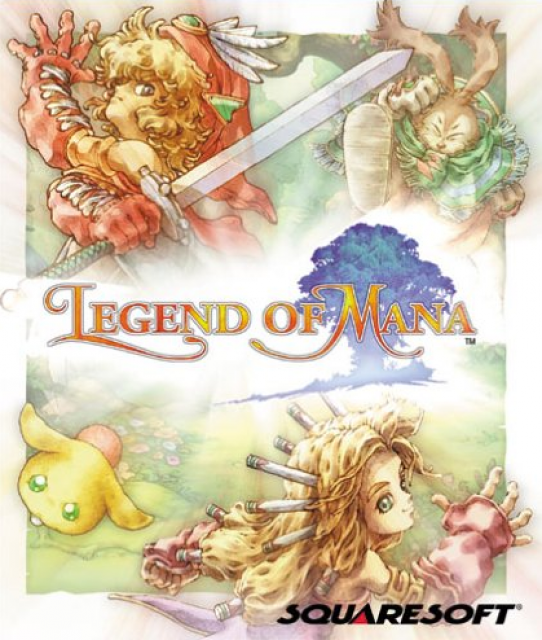